Mental illness as faulty circuits in the brain 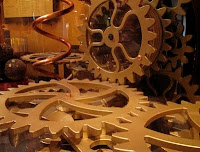 There is of course some localisation of function in the brain but dynamic interactions between multiple regions produce thought, emotion and behaviour. It's a long step to mapping specific mental illnesses to dysfunction of brain circuits. Insel himself concedes that more research is needed.

Moreover, Insel clearly juxtaposes his concept of mental illness as brain disorder with psychological disorders caused by psychic trauma or conflict. He says we need to rethink our approaches to diagnosis, treatment, and professional training. So he's happy for his approach to encourage psychosurgery and intracranial brain stimulation.

He got an airing of his views in an article, Faulty circuits, for the popular Scientic American. His claim that neuroscience will revolutionise psychiatry is no different from the one made by modern psychiatry since its origins with the asylums. How many more blind alleys will psychiatric research lead us down? Faulty brain circuits in mental illness are as much of a myth as biochemical imbalances.
Posted by DBDouble at 12:10 pm

The dog and pony show continues...

is he suggesting that this as incidental?
or aetiological?
faulty circuits = faulty genetics?
back to the faulty functions debate
strong naturism, as blind as the scanner.

I have just rediscovered your blog after a number of years. I have twin granddaughters now 11 diagnosed as autistic. I am a yogi and have been working on an inner level with the twins for a number of years. There is no history of autism in our family but extreme sensitivity and anxiety is strong. As a society we choose not to feel or express pain, and try and find pseudo scientific arguments, to attack those who react to the awfulness of what we have become by psychic withdrawal. We have avoided the medical model and the twins are fine, happy in their world, which is their right.

Wow, what basis do any of your opinions have if you openly and completely reject science? I think that it is really difficult for people to understand what it is like to live with a mental disorder or whatever you would call it that can't be fixed. I spent thirty years of my life trying to deal with it without any medication, I exercise, eat right, meditate, go to counseling yet my life was in shambles until I finally tried medication. Insel's research gives me hope for a day when people like you can't just look at someone like me and think that I'm weak or not trying hard enough. Just as you can't look at a person with diabetes who goes completely mental when their blood sugar is low and say that it is their fault.

I don't reject science. In fact I would argue I am more scientific in terms of regarding the facts. Nor am I blaming you for your problems. I'm merely recognising the importance of trying to understand them.