Seroquel is the best-selling psychiatric medication in the US and, as pointed out in a feature in Medical Marketing and Media (MM&M), its patent is due to expire in 2012. Its manufacturers, AstraZeneca, last year reached an agreement to settle US product liability litigation over Seroquel for about $198 million (see Wall Street Journal article). Earlier in the year it also paid $520 million to resolve allegations that it marketed regular Seroquel for off-label uses between 2001 and 2006.
However, this doesn't seem to matter to Astrazeneca financially with global Seroquel sales of $4.9 billion in 2009. And it is MM&M's Large Pharma Marketing Team of the Year. It has approval for an XR formulation which extends the use of the drug under patent. This formulation has been approved as an add-on to antidepressants for the treatment of major depressive disorder.
There's a full page advert for it on the back of this week's BMA News, which does not use the cloud as in the US campaign. The image of the depressed woman curled up in her kitchen unable to do her washing, which is used to advertise seroquel XL (it's called XL, not XR, in the UK) to UK doctors, for some reason seems to be different from that used for direct-to-consumer US advertising. 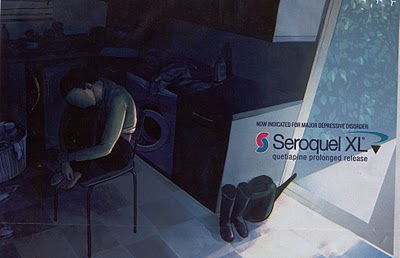