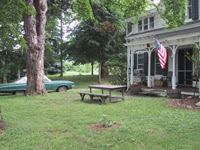 There does not seem to have been much comment about this switch. Women's disadvantaged social status is commonly seen as a factor generating mental health problems, but this doesn't explain the rise in men being detained. Maybe the emphasis over recent years on risk management and accountability is responsible. Ideas please and I'd also be interested in any references in the literature as I can't easily find them.
Posted by DBDouble at 8:57 pm