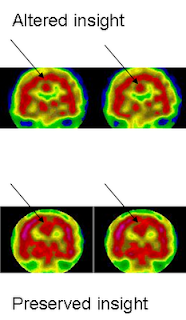 Despite Fuller Torrey's accusation, I am aware of the evidence that he cites for brain volume reduction in schizophrenia. However, I do object to his interpretation of this data as evidence of schizophrenia being a brain disease as such and his apparent unwillingness to debate his speculation. Any differences in brain volume are modest and there is an overlap with the normal population. The result is also non-specific as similar findings are found in other psychiatric conditions. Confounding variables such as nutrition and hydration also affect brain volumes. An association does not necessarily imply a causal link, as Fuller Torrey knows, and he should be more cautious in interpreting the data.
Posted by DBDouble at 12:25 pm

This is the canonical study on brain volume and schizophrenia http://archpsyc.jamanetwork.com/article.aspx?articleid=211084

"CONTEXT:
Progressive brain volume changes in schizophrenia are thought to be due principally to the disease. However, recent animal studies indicate that antipsychotics, the mainstay of treatment for schizophrenia patients, may also contribute to brain tissue volume decrement. Because antipsychotics are prescribed for long periods for schizophrenia patients and have increasingly widespread use in other psychiatric disorders, it is imperative to determine their long-term effects on the human brain.....

CONCLUSIONS:
Viewed together with data from animal studies, our study suggests that antipsychotics have a subtle but measurable influence on brain tissue loss over time, suggesting the importance of careful risk-benefit review of dosage and duration of treatment as well as their off-label use."

In other words, variations in brain volume might well be caused by the medications, not the purported "disease."

Someone who uses the phrase "schizophrenic patient" must think A) calling someone a schizophrenic is a legitimate medical act, and B) that people imprisoned against their will and labeled against their will should be referred to as "patients" and that C) the word "patient" is used because somewhere in the vicinity there is a real bona fide "doctor" carrying out real medical acts.

None of these are true.

Brain scans of people who have been through massive trauma come out the same as those labelled with 'schizophrenia'. Long term use of antpsychotics atrophy the brain. 'Schizophrenia' is not a 'disease' or an illness. Hearing voices is from past abuse and the brains way of dealing with trauma.

I'm of the opinion that there is great validity in the use of brain scans in Schizophrenia & that they in conjunction with better then currently neuropsychological testing can pinpoint the social cognition deficits in SZ and the areas involved.PET scans plus FMRI do show specific area involvement however this doesn't then automatically mean that SZ is a brain disease.It could be that an autoimmune attack on the brain has caused a lack of receptors and produced certain functional changes.It could be antibody caused in a similar way to Lupus psychosis and with other cases it could be viral caused in a similar way to herpes encephalitis.I don't think there's one Schizophrenia but that there is different causes & if people realise this then there would be less disagreement cause everyones theory fits in somewhere to become part of the unified whole regarding the cause/s of this complex illness/s.