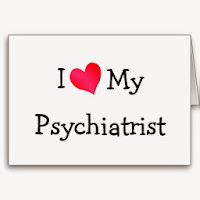 I am happy to use the terms 'mental health problems' and 'mental disorder'. And, I am less worried about using the term 'mental illness' than Peter. In fact, I go along with Bill Fulford in Moral theory and medical practice that medicine is primarily an ethical activity. In that sense, psychiatry is the pre-eminent medical speciality. Many people go to their doctor with physical complaints whose origins are psychosocial. Peter doesn't mention this issue in his book. In Germany, for example, psychosomatic medicine has developed as a separate speciality. There may not be that much advantage in me having a medical training for much of my work as a psychiatrist, but at least I do understand psychiatric problems in their medical context. I'm certainly not advocating neuropsychiatry as the solution to the commonly identified crisis in the role of a psychiatrist (eg. see book review). What's needed is a more patient-centred approach to medicine in general. Peter's prescription for psychiatry may provoke this response. But encouraging psychiatrists to be neuropsychiatrists is not the right way to do it. This is a central theme of what Peter calls the 'Bracken manifesto' (see previous post). And clinical psychologists and other mental health professionals do need psychosomatic understanding to be complete practitioners.
Posted by DBDouble at 8:21 pm

Does anyone actually think that receiving your mental health care from a GP will lead to a more "psychosocial" approach? Most psychiatric medications, particularly antidepressants and antipsychotics, are prescribed by GPs -- often off-label, i.e. inappropriately, such as using quetiapine for insomnia or aripiprazole for monotherapy of depression. Why would anyone believe that a GP, whose training and daily work consist almost entirely of diagnosing illness and prescribing the correct medication, would be less biomedically oriented than a psychiatrist who has received mandatory training in psychotherapy?