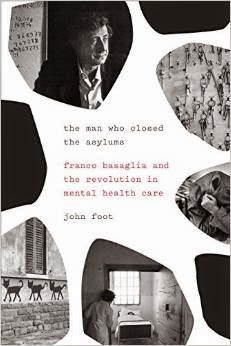 
Basaglia's influence has not always been assessed positively in the literature in english, particularly as he is seen as the architect of law 180, passed by the Italian parliament in May 1978. This law prevented new admissions to existing mental hospitals and decreed a shift of perspective from the asylum to treatment and rehabilitation in the community with diagnosis and treatment beds in general hospitals. The asylums actually started reducing in size in the UK and USA before Italy. Even though there has been controversy about Basaglia, the traditional asylums have come to be closed anyway as they became increasingly irrelevant to modern mental health practice. The historical perspective in the book on the origins of Basaglia's anti-institutional practice in Gorizia provides a corrective to some of the misunderstandings in the english literature.
Posted by DBDouble at 5:09 pm