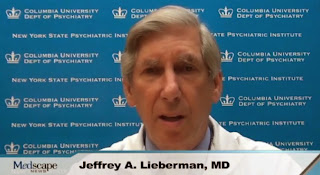 Lieberman is indignant that he has to deal with an anthropologist, like Luhrmann, commenting on such a "disciplined, bound in evidence, and scientifically anchored" subject such as psychiatry. Luhrmann in fact studied psychiatry by participant observation in her excellent book Of two minds. What Lieberman finds difficult is any scepticism about the effectiveness of psychotropic medication. As he says, debate about this issue should be encouraged.
Posted by DBDouble at 8:19 pm

Amazon description of the book contains a phrase as,

"At a time when mood-altering drugs have revolutionized the treatment of the mentally ill ..."

This can be interpreted as the idea of the writer of the book in a positive way as if he is supporting that usage of drugs. I believe, the writer doesn't have such a supporting stand for drugs.

He should ask Amazon to remove that suggestion.

The arrogant Jeffrey Lieberman is angry about a lot of things. He is angry that the "Emperor No Longer has Clothes" which must be a great source of shame to him. It is well known that Leiberman blocks anyone on Twitter who disagrees with the World According to Lieberman AKA DSM. There is no room for dissention in the eyes of the tyrant. Narcissists are forever indignant. But there will soon be a new world order as we are already witnessing a mental health paradigm shift which involves deconstructing the old bullshit DSM paradigm of mental illness. No one that is serious about advances understanding of healing those who have mental health conditions really cares what Jeffrey Lieberman has to say. Psychiatric drugs that he has promoted has done great harm to a great number of people including myself. You know....there are alternatives to psychiatric medications and psychaitry needs to start getting on board with that rather than just be a mouthpiece or walking advertisement for Big Pharma. Psychiatry needs to start acting ethically. Psychiatrists needs to start offering their patients alternative treatments, they needto start working collaboratively with therapists and other health care professionals by doing consulations, they need provide full disclosure when it comes to the risks associated with their drugs, they need to stop lying to patients about mood stabilization, they need to start taking trauma histories, they need to become trauma informed, they need to support their patients in tapering medications if a patient chooses to no longer take medications. Jeffrey Lieberman could do us all the greatest favor and just retire. But I think he'll continue ranting and raving and foaming at the mouth until he's in his grave. Time for the American Psychiatric Association to clean house and clean up the mess they have created for themselves. No amount of PR bullshit is going to save them from themselves.

If you want to see Lieberman at his finest, read the following comment he made regarding those who question his omniscience:

"I bear many scars from battles with Scientology and their anti psychiatry collaborators who have protested at scientific meetings and particularly during the period of the fifth revision of the DSM. The only thing that I can say about scientologies antipathy against psychiatry is that unlike the idealogical zealots like Robert Whitaker and patients who are unwilling to acknowledge their own illness and thus blame psychiatry. the motivation for scientology is money. They are promoting a religious philosophy to cure people of all their problems and view psychiatry as a competitor. So in some sense they're worse than the other anti psychiatry constituencies because their motivation is more venal, it's simply filthy lucre."

This quote can be found: https://www.reddit.com/r/IAmA/comments/3219ri/hi_im_doctor_jeffrey_lieberman_former_president/

Does this sound like the words of a professional that acts as a spokeperson for a professional organization? Calling people zealots, mentally ill and filthy. He shows a complete lack of respect for anyone whose opinion differs from him. Where is the room for dialogue?

The idea that anyone is promoting religious philosophy is a joke. The psychiatric industrial complex is also doing quite well for itself. In fact, they pretty much have a monopoly on the "mental illness" market by pushing out any competitors that offer alternatives to drug treatment. They have pretty much everyone convinced that medication is the answer to the pain and suffering that we humans universally experience in the name of #MedicatedandMighty and let's get rid of mental illness stigma by popping pills.

So according to the world according to Leiberman, I am a patient unwilling to acknowledge my own mental illness and I'm trying to blame psychiatry for my problems by default because I do not agree with HIS perspective, I do not bow to HIS authority. In reality, I have a legitimate issue with him refusing to accept the proposal for developmental trauma to be included in the DSM 5. Would Jeffrey Lieberman be willing to sit down across a table and discuss my concerns about the American Psychiatric Association? I doubt it. By refusing to acknowledge trauma as the etiology of most psychopathologies, he has forced trauma survivors into a mental health diagnosis straitjacket. Diagnosis is what determines the form of treatment that a patient receives. But what if that patient is misdiagnosed in the first place? What if the psychiatrist does not acknowledge or understand the source of your suffering or depression? What if your psychatrist told you that all disorders are a result of biological brain disorder or dysfunction? What if your psychiatrist was convinced that he was doing you a favor by diagnosing you as bipolar? What if you are told you need mood stabilization, you don't need therapy and we don't need to talk about your childhood? What if you were told you had to take medication for the rest of your life? What if it was all a lie?

And while I will admit that Jeffrey Lieberman has not actually made these statements, by denying that people experience childhood trauma, by denying its long term mental health implications, by failing to recognize it in the DSM he's pretty much saying, "Shut the Fuck Up, Trauma Survivor!"