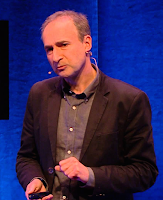 I've previously pointed out (see post) that psychosis has already tended to replace schizophrenia in everyday clinical practice. However, as I've also said, psychiatrists do tend to believe that psychosis is a brain disease (see previous post). I'm all for abandoning the notion of "schizophrenia" if it leads to mental illness not being seen as a brain disease. I agree that language does matter (see another previous post), but what's more important is to change conceptual understanding.
Posted by DBDouble at 7:29 pm