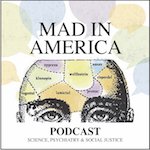 The latest Mad in America podcast includes an interview with Sir Robin Murray, who I have mentioned in previous posts (eg. Schizophrenia is not a neurodevelopment disease). Like him, I wanted to be a psychiatrist through reading Freud as a teenager. Similarly, we both got caught up in the 'anti-psychiatry' conflict and were interested in R.D. Laing. Murray opted for the orthodox view, whereas I gave up my medical training for 8 years and then returned to complete it to become a critical psychiatrist. I ended up having a different view of schizophrenia from him (eg. see my BMJ letter, although there is an error in the letter referring to Lyn Pilowsky as “he”). And, I have spent my working life as a consultant as a full-time clinician, unlike Murray, who was an academic, only working part-time clinically.

And, I do not want to be misunderstood. Of course I know that minds are enabled by brains. But this does not mean that minds are reducible to brains. To use a quote from Adolf Meyer that I have used before, "mental disorders show through the brain but not necessarily in the brain" [Meyer's emphasis].
Posted by DBDouble at 4:15 pm

Just exactly when did anybody with a diagnosos of any serious mental health problem in the 70's or any other decade receive anything other than toxic drugs - psychoanalysis in the UK? for the tiny minority of those in analysists' own social groups - maybe.

Email correspondence between Robin Murray and myself:-

Its flattering that you take the trouble to argue with what you think to be my position. However, I fear you are arguing with an aunt sally of your making

I assume we would agree that the brain processes social information and the lungs air. Just because the final common pathway underlying asthma involves inflammation and cytokine release in the bronchial endothelium does nothing to diminish the fact that air pollution is one of the most important current causes of asthma. Similarly, (in my view) the fact that striatal dopamine release is the final common pathway underlying positive psychotic symptoms does nothing to diminish the evidence that child abuse, stress, migration are all important causes of psychosis (via increased salience secondary to striatal dopamine release).

Thanks for your reply. I didn’t mean to mislead. I do appreciate your social perspective.

I suppose the question is what does it mean to say that striatal dopamine release is the final common pathway underlying positive psychotic symptoms. As you say this is your view, but I doubt it is correct. When you say that certain social factors have increased salience, this is said to be secondary to dopamine release. I take it, therefore, that your understanding is that dopamine release is the primary problem. This is far too mechanistic an explanation for me. I’m not saying that it’s always easy to understand psychosis in psychosocial terms, but what’s important clinically is to try and help someone understand their symptoms in these terms, rather than suggesting they’re due to problems with dopamine release. In fact, it’s misleading them to suggest it is, because I think your statement about “final common pathway” in fact goes beyond the evidence.

I’m only trying to tease out what our differences are and I do respect your view. Do you have any objection to me posting this email correspondence as a comment on the blog?

Its possible to treat asthma by brochodilators or even steroids but these are of course purely symptomatic.
Its better in the longterm to remove the cause e.g. by moving away from a motorway and breathing clean air.

Similarly we can attempt to treat psychosis by blocking the final common pathway with antipsychotics – but
In the longterm it is important to try and address the causes e.g. adversity, isolation, alienation, etc

I have no objection to you putting this discussion on blog.

Similarly I have a pragmatic view about medication, although sceptical of the evidence.

To take up an argument or discussion with someone is not 'flattery' it is what should be going on between all involved as 'users' or 'practitioners' and academics who tend not to have any actual relationships with service users.There is a massive groudswell of anger about the medication of human distress and mental illness. Robin M reveals how little the type of research carried out so far has genuinely helped the majority of people who are being prescribed drugs and which in fact has created more illness as a result of the toxic often irrevrsible adverse effects. How many in receipt of 'treatment' are given the information described here? Robin lets psychiatrists and GPs off the hook all too easily. Readers will probably know of some of the consequences of taking prescription drugs -without informed consent, withot warnigs of the potential consequences,.. without adequate health checks without help to withdraw - he is wrong to imply that GPs are necessarily the ones to assist - they are not properly trained in prescribing or diagnosing , They as well as psychiatrists are doing more harm than good . If psychiatry was being exprerienced overall as helpful there would not be so much anger about the way it is practiced or as many groups actross the globe speaking out against psychiatry. A book worth reading is by Aunty Psychiatry - Of Course I'm anti-psychiatry - aren't you? Most people begin by trusting healthworkers - too many end up wishing they had never encountered the mental health services .Academic discussions are fine and necessary but yet another 'exciting' project to entice students is not going to impress those on the receiving end until those students learn a different approach - the older cohort of psychiatrists are unlikely to be role models. What was your parting advice to students Robin ? - as you said yourself it was to pass n the words of wisdom of your own teacher - to never leave the room in front of a person with mental illness. Very inspirational.

"in the interview, he talks about dopamine being involved as the "final common pathway for psychosis"

That would depend on whether the psychiatrist trusts a patient enough to believe them. A real problem with a neighbor creating disturbances at all hours of the night and day is not psychosis and has nothing to do with dopamine.
I know someone who was in just this position and their landlord was the CFO of the hospital they ended up in. The situation became "political" as the psychiatrist found it more convenient to believe the patient was suffering from psychosis, stick a label on them and dismiss them - in spite of other neighbors providing substantiation for the patient's story.
There was no psychosis - except perhaps on the part of the psychiatrist and apartment manager/CFO of the hospital. They didn't have to face the nightmare reality of what was going on at the apartment building.