PTM Framework is not anti-psychiatry 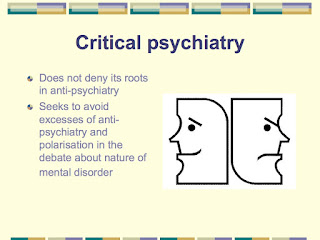 I have blogged previously on the Power Threat Meaning (PTM) Framework (see post). Twitter is not always the best place to discuss these kind of issues, as people can act out their nastiness. I don't think people who have called the Framework 'anti-psychiatry' are necessarily "nasty". But it might be worth thinking about what it means to label someone, and even the PTM Framework, as 'anti-psychiatry' (eg. see previous post).

I want to encourage people to view the PTM Framework positively. Lucy Johnstone, in a recent MIA podcast, has made clear that any attempt to describe patterns of responses need to be recognised as meaning-based differentiations, not absolute distinctions. I totally agree. I'm not suggesting returning to Meyer's attempt to classify reaction types, but I have long argued that we need to return to his theoretical principles (eg. see another previous post). Revisions of the DSM have been totally misguided (see yet another post) and the PTM Framework should be seen as a potential way forward.
Posted by DBDouble at 2:11 pm