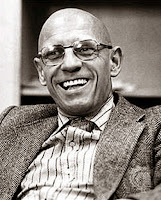 Further to my previous post about postpsychiatry, I have found that I like the view of John Iliopoulos that Foucault was not necessarily for or against the Enlightenment (see his PhD thesis (2013) and subsequent book (2017)). The Enlightenment is not so much about the "principles of humanism, liberalism and positivism" (book p.18) but the point when reason itself started to question "the rational foundations of what is accepted as reason" (book p.7). It was this "critical engagement of reason with itself which brought psychiatry as a discipline into existence, and it is the same conflict, the same battle which fuels current debates in psychiatry" (thesis, p.7).

Foucault draws on Kant's philosophy. "Kant's method of questioning the pretensions of rationality, and reflecting on the limits of who we are through reason, inspired Foucault to analyse the birth of the human sciences, and especially of psychiatry" (thesis, p.21-2). In the late eighteenth century, alienism identified certain individuals who were "agents of an experience whose content eludes understanding" (thesis p.167). The insane were separated from places of confinement and placed within asylums.

Madness thus became separated from where it was within medicine in the sixteenth and seventeenth centuries. At that time, "'[m]aladies of the spirit' existed and theories of humours were used to explain mental disorder" (thesis p. 99). From the middle of the nineteenth century, the idea of madness was then "inserted into positive medical knowledge" (book p.20). But, incorporating positivism led to psychiatry losing "its scientific rigour and its validity" (book p. 22).

Iliopoulous also has an article, from which I have produced a tweetorial, that takes this situation forward to the twentieth century. With the development of community care, psychiatry has become accountable to the public.

What I like about this historical narrative is that it fits with my view that there has always been a critical psychiatry perspective since the origins of modern psychiatry (see previous post). Critical reflection is not confined to a particular historical period. Although it may be unrealistic to expect a paradigm shift in psychiatry (see previous post), "Foucault argues that verification and positivism have excluded, set aside and subordinated other modes of truth production" (book p.123). Such critical perspectives are important.
Posted by DBDouble at 10:10 pm

Sorry Duncan, not really convinced by much of this. At the March 2018 CPN conference Phil Thomas said that early Foucault was Marxist, but [F] later developed a view of power than saw power as a good thing at times. For me, Phil (like many others) failed to give any examples. Presumably Marx himself (fore)saw power as a good thing when wielded by the future 'dictatorship of the proletariat'.

This paragraph from my comment under your recent piece on Sami Timimi (http://criticalpsychiatry.blogspot.co.uk/2018/03/the-psychiatrist-as-cultural-interpreter.html)summarises my current view: 'When I first read Sami's [Timimi's] work in the mid 2000's I was underwhelmed by it's naive rejection of 'modernism' and setting up of 'postmodernism' as the answer. Bracken and Thomas' 'Postpsychiatry' was similar. For me, and for many who read the broadsheet press, the Sokal Hoax had deflated PoMo, Deconstructionism and Foucault in 1996-8. With hindsight, this was best anticipated by Terry Eagleton's Illusions of Postmodernism (1992).'

I try to avoid the term 'positivism', except when talking about the 19th Century Comtean version, or the 'logical positivism' of the 1920s to 1950s that was de-throned by Karl Popper in the UK. Usually better, I think, to use 'scientism', as Sami himself has done recently: https://www.madinamerica.com/2018/04/the-scientism-of-autism/ . An alternative in some contexts, and perhaps your piece here, would be mechanism/mechanistic.

'Positivism' often gives a spurious quasi-philosophical gloss to those concepts, widespread in much 'critical theory'-informed academic writing. It occurs a lot in the full version of the 'Power Threat Meaning Framework', where it has the additional function as 'other' to a supposedly 'scientific' Foucauldian Psychology: https://www.bps.org.uk/news-and-policy/introducing-power-threat-meaning-framework