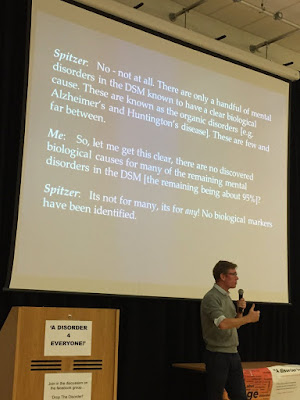 I have mentioned in a previous post how Sami Timimi couldn’t understand why he was indoctrinated in his psychiatric training. Similarly, I remember the discussions I had with Alec Jenner, my professor of psychiatry in Sheffield (see previous post), about why people believed what they did about psychiatry. The problem is that the belief in the biological basis of functional mental illness will never go away (see my tweet in response to @ClinpsychLucy). I’m not one who hopes for a radical, new psychiatry that will replace biomedical psychiatry. But we do need to break the dominance of the biomedical model and recreate a more pluralistic psychiatry. This situation is not helped by dissolving the distinction between functional and organic mental illness, which needs to be reinstated.
Posted by DBDouble at 9:44 pm