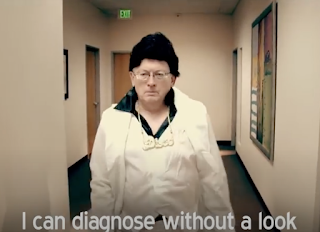 I made a serious attempt in a previous post to deconstruct the American Psychiatric Association in how it presented itself at an annual meeting. Actually I'd already realised (in another previous post) that Stephen Stahl and his NEI Psychopharm had done the job of hilariously self-deconstructing psychiatry, however undeliberate, in its series of videos. Unfortunately the congress opener for the 2011 NEI Global Psychopharmacology Congress that I mentioned in that post seems to have been taken down. As far as I can remember it had Stephen Stahl dancing in it. Anyway, you can laugh at the more recent 2019 NEI Congress Opener. And you can still see Stahl starring and dancing in this video about DSM-5.

More seriously, Stahl explains that he had to take Psychiatra-Gain to deal with the boredom he was feeling in working with patients (see another video). This created his Alice in Wonderland worldview (see video). It leads to trying out lots of medications on patients in a fun way (see video), although the original psychotropics are still the best (see another video). Thank goodness someone at least is taking psychiatry seriously.