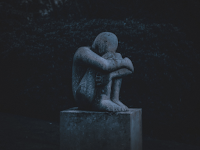 Bruce Levine (who I've mentioned in a previous post) highlights three reviews in his Counterpunch article that confirm that "there is no scientific evidence for what we have long been told by psychiatry — and the mainstream media — about the neurobiology of depression", ie. that depression is a brain disorder. As one of those reviews by Peter Sterling says, "if neuroscientists are unwilling to acknowledge that their hypothesis of depression as a brain disorder currently lacks evidence, they render it unfalsifiable — and thus 'just like' religion".
As I've said several times (eg. see previous post), biomedical psychiatry is more like a faith than a science. It doesn't seem to matter that there's no evidence that depression is a brain disorder. There's always enough belief that the answer to mental illness is just round the corner and we merely need to keep looking for it. The brain-defect mythology of depression will therefore persist, as we do not want to admit to the limits of our knowledge about mental illness (see previous post).

But it's not just the lack of evidence for believing that mental illness is brain disease that's the problem. As I've also said before (eg. see another previous post), functional mental illness cannot be reduced to brain disease in principle. The hypothesis is not just an empirical matter. The subject matter of psychiatry is people as a whole, not their brains. Brain abnormality is not a sufficient explanation of depression in the same way as it is for organic mental illnesses, such as dementia. We need to understand the reasons for depression and these meanings are lost by looking for mechanistic explanations in the brain. There are conceptual as well as empirical reasons why depression should not be seen as a brain disorder.