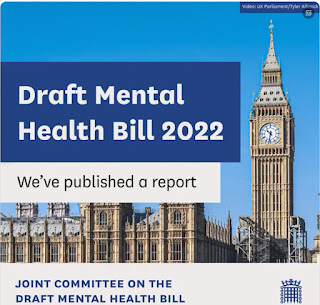 The Joint Committee on the draft Mental Health bill has produced an impressive report (see eg. last post and twitter thread of what the Committee sees as the highlights. Also, see the walkthrough of conclusions and recommendations by Alex Ruck Keene.). I particularly welcome the Committee’s not necessarily expected recommendation to abolish Community Treatment Orders (CTOs) for civil patients. Although it is keen for the Mental Health Bill to be passed into legislation as soon as possible, it also promotes the need for ongoing reform. The Committee helpfully recommends the creation of the post of Mental Health Commissioner and the introduction of pilots for patients to be able to appeal to a slimmed down Mental Health Tribunal about treatment plans. It makes helpful recommendations about incorporating reference to the principles of racial equality, choice and autonomy, least restriction, therapeutic benefit and person as an individual on the face of the Act.

Although it expresses concern that the introduction of conditional discharge for restricted patients may be overused, the Committee only recommends close monitoring of implementation with a statutory review after 3 years. My main concern about the report is that it does not seem to have considered the need to improve the right to an independent second opinion from a person of the patient’s choice, rather than just from a Second Opinion Approved Doctor (SOAD) appointed by the Care Quality Commission (CQC). As I said in a previous post, the strengthening of the role of SOAD is welcome, but this should be taken further by making the second opinion process even more independent. I think this is particularly the case in the context of developing the role of the Tribunal to consider treatment decisions and I would argue that eventually SOADs could be abolished.

The Committee emphasises the need for adequate resourcing of the MHA changes and sees it as essential that a detailed plan for resourcing and implementation is produced on introduction of the Bill. I look forward to seeing the government's response.