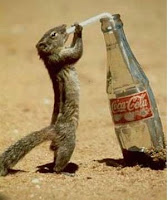 Brain mechanisms associated with reward are presumed to be disrupted. Of course, addiction or dependence, whatever you call it, is something to do with the brain. And it's also a habit that may be difficult to break, not least if it's associated with physical withdrawal symptoms. But it's sheer neurologising tautology (as Adolf Meyer used to call it) to think that anything has been explained by calling psychological dependence a brain disorder/disease. It doesn't make sense to say that psychological addiction is caused by a structural brain abnormality, rather than being a functional problem. If specific brain abnormalites have been found in addiction, we'd know what they are.
Posted by DBDouble at 7:36 pm

"But it's sheer neurologising tautology (as Adolf Meyer used to call it) to think that anything has been explained by calling psychological dependence a brain disorder/disease."

Thank you. So much bullshitting around that it's always good to have rational observations to rein in the most ludicrous fantasies of people claiming to have science on their side.

I'm pro-science. But before being pro-science, I'm anti-bullshit. And I'm glad you called out the bullshit.