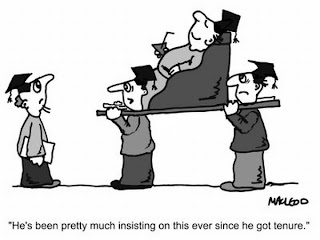 As a follow-up to my post on Why haven't professors of psychiatry used their tenure to go up against the system that we’re in?, I suppose Thomas Szasz is the exception that makes the rule. There's a tweet that agrees with me. I guess Szasz has been lucky to have tenure.

The best article that explained what happened to Szasz when his tenure was threatened is by Ronald Leifer. Perhaps I'm just jealous that I've had to carry on in the real world of psychiatric practice and not had the freedom of tenure like Szasz, still going aged 90.
Posted by DBDouble at 6:27 pm