The obvious effects of antidepressants 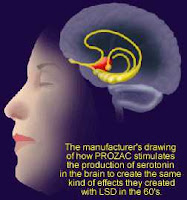 Edward Shorter, in his book, Before Prozac, rues the fact that there has been no progress in the pharmacological treatment of mood disorders, since imipramine was introduced in the 1950s. He quotes from Roland Kuhn, who discovered imipramine, and who "never used 'controlled double-blind studies' with 'placebo', 'standardised rating scales' or the statistical treatment of large numbers of patients". Instead, what Kuhn noticed was an "obvious effect" in improving vital depression in psychiatric patients that he tried it on. To use a quote, again from Kuhn in Shorter (2009), "The patients become generally livelier, their depressive whisper voices become louder, the patients appear more social, the yammering and crying come to an end."

As I pointed out in a previous post, how do we know that antidepressants aren't just placebos with side effects? What Kuhn may have "discovered" was merely the placebo effect.

Shorter thinks we may have "lost something" because today "Kuhn would be kicked out of the door at the FDA", by which he means imipramine would never have come onto the market without controlled trials to support it. As he says, what we've got at the moment is a "mesh of patent-protected remedies". I agree this isn't progress, but Kuhn may have merely sent us down the route of the wish-fullfilling phantasy of the chemical cure of depression.
Posted by DBDouble at 1:23 pm

I agree that antidepressants aren't as effective as supposed. But does the magnitude of the placebo effect itself deserve a critical re-examination?

“Alternative methods rarely carry the official stamp of approval, but in spite of this more and more people are turning to this sector for help. This is of course a matter of concern to established medicine which has no ready explanation why its share of the market is diminishing. The idea that alternative methods actually yield good results is mostly avoided. Instead recourse is to a seemingly obvious explanation, namely that all the positive effects claimed to have resulted from alternative treatments are simply placebo effects”.

“Here, certain rules that have become established since the middle of the 20th century are being exploited. It is regarded as self-evident that a method of treatment should be demonstrably better than placebo in order to become officially approved. Clinical judgment or other informal ways of sifting evidence are not accepted”.

“According to a statement that has been cited innumerable times since the 1950s, a placebo makes the patient feel better in about 35% of cases (ref: The powerful placebo. HK Beecher. JAMA 1955:159:1602-6). It would take 40 years before a German physician (Gunver Sophia Kienle) exposed this still very often quoted paper as full of careless mistakes and misinterpretations. The 35% improvement rate is plainly a gross exaggeration (but) the otherwise so meticulously critical medical community has been living for decades with a picture of reality that has not been checked. Why? Could the reason be that this story was too useful in its original form?”

“Today some further facts have been added to Kienle’s revealing analysis and the placebo effect has shrunk into something that can only just be shown to exist. It would be remarkable if no great differences were to be found between different diseases and situations regarding the immediate and long-term influence of diffuse psychological factors. Lumping them all together, as has been done for nearly half a century, would simply be intellectually dishonest now… In May 2001 (Danish researchers from Copenhagen found that) when improvement was measured as a simple ‘yes or no’ there was no tendency for placebo to be more effective than no treatment ”. (ref: Is the placebo powerless? An analysis of clinical trials comparing placebo with no treatment Hrobjartsson A, Gotzsche PC. NEJM 2001:344:1594-1602)

“Accordingly, placebo is not the strong factor it has long been believed to be (and) quite a lot of rethinking will be required”.