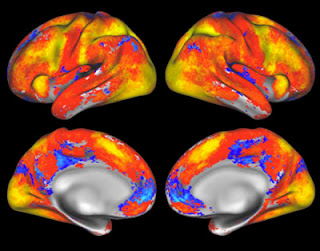 The blog entry by Thomas Insel, NIMH director, has created much comment (eg. New Scientist article and blog post by Phil Thomas). I've mentioned before how grandiose Insel can become in his claims for mental disorders as biological disorders involving brain circuits (eg. see previous post). His RDoC project will not create a new nosology despite his wishful thinking. As he says, we lack the data to "design a system based on biomarkers or cognitive performance". We need to accept the uncertainty of psychiatric practice and medicine in general, rather than promote 'precision medicine' as the solution to mental disorders as he proposes.

Nonetheless, we should welcome NIMH re-orientating its research away from DSM categories. It may actually be progress if this means funding research on patients without relying on diagnostic criteria.
Posted by DBDouble at 3:05 pm

In 1994 German Berrios said that he believed the "crucial moment of diagnosis [was] is not really the putting of signs and symptoms together in some cluster or other but in the recognition of symptoms and signs. However old fashioned this claim may sound today, I firmly believe that there in lies the future of research in psychiatry and that it is only a matter of time before American Psychiatrists change their mind. Once they have done so, psychopathological research will become respectable and everyone will follow."

Isn't this, up to a certain point, what Insel suggests with his RDoC?

Shrinks and their laughable attempts to reduce the problems of human life to biology. You only live once, a wasted life is a life spent in psychiatry.

Our article in press at the Turkish Journal of Psychiatry: Science, Psychiatry and the DSM.
We conclude that psychiatry as a medical discipline should be abandoned.
http://www.turkpsikiyatri.com/Data/UnpublishedArticles/of53uu.pdf

Having Asperer Syndrom (or mild autism or pdd or wrongplanet syndrome) etc... along with some childhood truma, I've had a myriad of diagnosis and corrisponding medications.
It has always amazed me that in that time there seemed to be no attempt to actually get to the route cause of the problem and so develop a greater understanding. An example of this can be seen in suddies into the efectiveness of Ketamine (a widly used drug both socially and medicinally), I've taken a backstreet approach to my own psychietric treatment at times and reported anything that I found to be effective to a number of medical professionals who where in charge of my care. You would have expected methods a patient was using to have been passed on some where, so that if enough people where reporting success than research could be carried out. We from what I've read research into ketamine came not from depressed people reporting it's effects (and it's pretty amazing) but from people with pain problems, who where being treated, who reported that their depression had gotten better. (which was initially put down to no longer being in pain).
This brings me to the next point,
If I look at one diagnosis I've had, depression, a look at the DSM lists many types and causes, it could be situational for instance, it coul also be related to bi-polar, thyroid problems, pain, schizophrenia... the list goes on.
So in that sense the umbrella of depression isn't that usefull, sure some people will get better `taking MDMA (SSRIs) and going to a rave (counselling)` but some won't, and that's more related to the 'causality' than the symptomology of a persons condition. More over 'self medication' or backstreet psychietry techniques being imployed by the individual could give great insite in the underling nature of the condition and possible new treatments, a valuable diagnostics tool if nothing else.

All of this seems to have gone compleatly amiss with the, well over 20, psychietrists I have seen over 15 years or so (actually one when i was 6-7years old too)

But in some instances diagnosis categories are important, for instance I think in a very black and white way, pervasivly, that is it covers my thoughts, feelings, senses and emotions etc... This becomes important when it comes to diagnosing and treating co-morbid conditions such as depression. For instance black and white thinking is seen as mall adaptive in CBT, yet I have made a good carear in the sciences out of the way that I think. I also have issues with inverse and black and white drug responses too... so some things have the opposite of expected effect, some things have a very strong effect and for some things I need an elephant dose before it has any effect.

So for conditions with strong genetic links such as ASPD, Autistic spectrum and things like schizophrenia in some cases existing categories are usefull. But again, if you're studying psychosis in schizophrenia it's probably wise to study psychosis in a wider sense, not least so you know how people with schizophrenia may present differently than say someone with drug induced psychosis or a reactive psychosis (brief or otherwise)

Your emphasis of Berrios' view is very much to the point. Berrios & all brilliant European physicians need to be taught more extensively.