Psychiatry and its critics 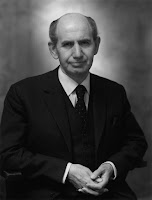 I've mentioned before (see previous post), that it's about time we moved on from the debate about 'anti-psychiatry'. It is generally seen as a passing phase from the 1960s/70s in the history of psychiatry. The trouble is that the term continues to be used (eg. see Psychology Today blog post). Part of the reason for wanting to move on is because of the confused way in which the term is used, which the Psychology Today piece to me seems to exemplify.

As I've also mentioned before, there actually was some value in the work of anti-psychiatry (see previous post). It shouldn't be seen merely as a negative contribution to psychiatry. As I wrote in my editorial, "it is difficult to accept that there was no value in the approach and what may be more beneficial is to look for the continuities, rather than discontinuities, with orthodox psychiatry" (see also my essay review). Personally I've always tended to emphasise the links of critical psychiatry (which I differentiate from anti-psychiatry) with mainstream psychiatry (see another previous post).

The term 'anti-psychiatry' was coined by David Cooper (see eg. previous post). It came to incorporate earlier writings by R.D. Laing, Michel Foucault, Erving Goffman and Thomas Szasz. It was most associated with the views of Laing and Szasz, who actually had very different perspectives (see eg. another previous post). Szasz, for example, equally rejected both mainstream psychiatry and Laing’s views. The emphasis on therapeutic communities in the Laingian version of anti-psychiatry led to positive developments such as the Philadelphia Association (see previous post) and the Arbours Association. The anti-institutional concerns of anti-psychiatry contributed to the rundown of the traditional asylum, with political impact such as that of Franco Basaglia in Italy (see previous post). The application of social labelling theory to mental illness, for example by Thomas Scheff (see my book review), had particular implications in the study 'On being sane in insane places' by David Rosenhan, which caused a crisis of confidence for psychiatric diagnosis at least for American psychiatry (see previous post). This was countered by the development of DSM-III. There were also international perspectives to anti-psychiatry, such as: French anti-psychiatry, particularly identified with Gilles Deleuze and Felix Guattari; Frantz Fanon in Algeria; and Jan Foudraine in the Netherlands (see my book chapter).

Maybe the term 'antipsychiatry' (without the hyphen) should now be reserved for the argument for the abolition of psychiatry (see previous post). But, I'm afraid it's still being used in the same way (eg. in the Psychology Today blog post mentioned above) as it was originally by mainstream psychiatry to denigrate any criticism, including valid criticism, of the biomedical model in psychiatry. I think this usage goes back to articles such as that by Martin Roth (1973).

In the article, Roth frames the debate about anti-psychiatry as an attack on the deterministic scientific nature of psychiatry. He recognises that this issue raises difficult philosophical questions and creates a need to reconcile deterministic concepts of causation with the inner experience of free will. He sees psychiatry as making progress towards this end by, for example, being able to describe the medical and social profile of those who commit suicide. He believes the Enlightenment represented the replacement of moralistic and transcendental attitudes with rational and deterministic explanations.

Roth is correct that the conflict between determinism and free will is ultimately unresolvable. However, critical psychiatry does not take the same positivistic view of biological and biomedical sciences. In fact, the postpsychiatry version of critical psychiatry explicitly sees such a modernist agenda as untenable (see eg. previous post).

A mechanistic worldview, which Roth calls science, confers an apparent advantage by providing a predictive and systematic way of understanding and manipulating nature. However, this leaves the phenomenon of life in an equivocal position because it cannot be totally stripped of its intrinsic purposiveness (see previous post). Rene Descartes (1596-1650) regarded both animate and inanimate matter by the same mechanistic principles. Animals are therefore machines; and human physiology is also mechanistic. Descartes stopped short, though, of including the human mind in this mechanistic framework. The soul was denied any influence in physiology. Descartes, thereby, avoided the materialistic implication that man himself is a machine.

Although Georg Ernst Stahl (1659-1734) claimed erroneously that living things possess a vital entity, his dualistic notion was different from Descartes, in that he differentiated organic life from the inorganic, not the soul from the body. Unlike Descartes, the soul and body were not separate but integrated in the organism. Stahl originated an organismic perspective in the life and human sciences. This perspective formed the basis for Stahl having an emphasis on psychosomatic medicine, and a focus on clinical medicine rather than the physical sciences.

Despite what Roth implies about the modernism of enlightenment thinking in the second half of the eighteenth century, the critical philosophy of Immanuel Kant (1724-1804) was clear that it is absurd and futile to expect to be able to understand and explain life in terms of merely mechanical principles of nature (see previous post). A mechanistic conception of nature fails to provide a complete characterisation of living systems. Organisms, unlike machines, are self-organising and self-reproducing systems. Different modes of explanation are therefore required for teleological and mechanical points of views.

What's needed is a pragmatic approach which focuses on nature and experience and the centrality of the organism-environment interaction. Life’s dynamic, systemic and purposive character needs to be promoted as a way of moving on from physico-chemical reductionism, which tends to eliminate the meaning of human action. Life is continuously and dynamically preserving its internal environment and is therefore a perpetual stream of matter and energy, better understood as a process than a static unchanging entity (see previous post).

Roth rightly recognises that it is the mechanistic approach to mental illness that is being criticised and notes the difficulties in identifying the social cause of mental illness. But his reason for rejecting a social perspective is not valid. This is because he expects social explanations to be determinist, which they are not. Moreover, he resorts to genetic factors to avoid environmental explanations. I agree with Roth’s conclusion that constructive endeavour is required to resolve the manifold problems of contemporary psychiatry. However, his labelling of any criticism of the biomedical model of psychiatry as ‘anti-psychiatry’ has hidden the extent to which the critique of reductionism and positivism in psychiatry is valid. Modern apologists for psychiatry by labelling their critics as ‘anti-psychiatry’ are doing the same. Instead they should examine how much psychiatry reduces people to objects and uses an inappropriate mechanistic psychology and biology.