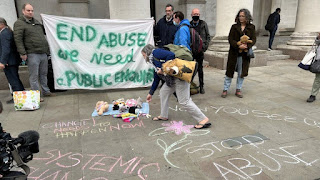 The scandal at the Edenfield Centre exposed by the BBC Panorama programme is reminiscent of scandals in the asylums from the 1960s. Services haven’t really progressed from the worst aspects of the asylums (see Mail on Sunday article).

The asylum scandals came to light from whistleblowers going to the papers rather than BBC television as in the Edenfield case. Panorama used similar undercover reporting to expose the same sort of abuse of people with learning disability at Winterbourne View and Whorlton Hall (see eg. previous post). The subsequent focus on reviewing the care plans of learning disabled people through independent Care Education and Treatment Reviews (CETRs) has not really reduced segregation, mistreatment and inappropriate provision (see another previous post).

The phase of public inquiries into the asylums was launched by the Ely Hospital inquiry. In 1967 a nursing assistant at Ely Hospital in Cardiff made a series of allegations about the treatment of patients and the pilfering of property by staff. These allegations were published in the News of the World. The inquiry found examples of callous, ‘old fashioned and unsophisticated’ techniques of nursing control. Although in most instances this practice was not seen as ‘wilful or malicious’, nursing standards were low, supervision weak, reporting of incidents inadequate, and training of nursing assistants virtually non-existent. Staff were found to have pilfered supplies of food. There were determined and vindictive attempts to silence complainants. It also transpired that members of the Nursing Division of the Ministry had visited Ely some years before and had reported ‘scandalous conditions, bad nursing’, and yet nothing had been done about it. In essence the inquiry report confirmed the basis of all the News of the World revelations.

Another influential inquiry was the Whittingham Hospital inquiry. In 1969 two senior members of the staff at Whittingham Hospital near Preston, Lancashire, made allegations of ill-treatment of patients, fraud and maladministration, including suppression of complaints from student nurses. Two male nurses were convicted of theft. Shortly after the police investigation a male nurse assaulted two male patients, one of whom died. The nurse was convicted of manslaughter and imprisoned. An inquiry was set up after the trial was over. What was significant about the report was that it placed the responsibility on the management for the institutional conditions that led to callous and incompetent nursing and some deliberate cruelty. The inquiry also uncovered suppression and denial of student nurses’ complaints about ill-treatment.

The political response to this series of inquiries was to set up the Hospital Advisory Service (HAS), which, independent of the normal departmental machinery, provided visiting teams for inspecting hospitals. The Care Quality Commission (CQC) now provides a similar function, although using different methods. Arguably it has more powers than HAS, but it did rate the Edenfield Centre as good. CQC can close private providers but NHS services such as Edenfield can only be put into special administration with its services being taken over by other providers.

The other main political consequence of the asylum inquiries was the government’s renewal of its promotion of the policy of community care. The view was strengthened that society should not reject its mentally ill and learning disabled people. No longer was it appropriate to consign these people to distant institutions where they lived their lives out of sight and mind of the rest of society, with the potential for them being abused. The white papers Better services for the mentally handicapped (1971) and Better services for the mentally ill (1975) were published. Mental illness hospitals were to be replaced by a local and better range of facilities. On the other hand, the government also wanted to correct the misapprehension that it was actively encouraging a precipitate rundown of psychiatric hospitals.

Louise Hide (2022) provides an overview of the asylum inquiries in her book chapter. This historical perspective is relevant for current problems with services. As I said in my eletter,  open-door policies in traditional psychiatric hospitals led to England reducing its number of inpatients from 1954 before other European countries. The 1959 MHA made informal admission rather than detention the usual method of admission. By 1963, 80% of English psychiatric patients were in open wards. The advantages were striking: tension reduced, violence declined, ‘escapes’ were no longer a problem and staff were able to give their attention more to therapy rather than custody. This therapeutic trend was reinforced by improving patients’ rights in the 1983 MHA. Many old long-stay patients grew old and died in hospital, and the number of new long-stay patients to replace them became much less. With the reduction in hospital bed space, there was a reduction in the average length of stay, although actual numbers of acute admissions increased, including so-called ‘revolving door’ patients. The traditional asylums went into decline and became increasingly irrelevant to the bulk of mental health problems.

There was resistance to the rundown of the psychiatric hospital, not least because it was seen as a challenge to the authority of psychiatrists. Attitudes to community care were polarised and only ended after the traditional hospitals were eventually closed. Fears about public safety due to homicide by psychiatric patients led to the new Labour government’s controversial conclusion that community care had failed. Even if this was true, which I do not think was the case, community care has clearly not developed sufficiently to prevent continuing abuse in hospital.

The harm caused by inappropriate detention in psychiatric hospital must be acknowledged. Services again need to focus on the development of community care, not that inpatient care may not be needed at times, which, whenever possible, should be truly informal rather than formal under detention. The current draft Mental Health bill being considered by a parliamentary scrutiny committee does not go far enough (see eg. previous post).

What made progress with the asylum inquiries was the Whittingham hospital inquiry, which saw the problems as institutional rather than only blaming individuals. I think Edenfield needs a similar independent inquiry. It's no good relying on the CQC and NHSE, from which there is a need for independence. Psychiatric services need to become more open and therapeutic. We need government to produce a new mental health strategy (which is currently going through a refresh - see webpage) that makes services more integrated and less dysfunctional.