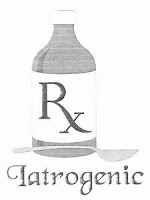 I've mentioned before, when discussing the Royal College of Psychiatrists' views about antidepressant discontinuation problems (see previous post), that the College has not paid enough attention to adverse reactions to antidepressants and psychotropic medication in general. Fava & Ravanelli (2019) discuss psychological and behavioural iatrogenic effects of psychiatric medication.

These effects include: ''paradoxical' mood changes eg. increased anxiety with anxiolytics and worsening depression with antidepressants; 'pendular' mood changes eg. euphoria with antidepressants; tolerance and loss of treatment efficacy, dependence and withdrawal effects, which may be persistent; cognitive impairment and apathy. Frequency of such reactions varies enormously.

Dismissing iatrogenic side effects of psychotropic medication as trifling may well be unhelpful. In practice, the specific pharmacological action of a psychotropic drug in terms of its intended therapeutic action (eg. antidepressants intended to improve depressed mood; anxiolytics intended to treat anxiety) may in fact be very difficult to differentiate from side effects or even the general physiological effects of the drug. For traditional neuroleptic medication, for example, such as chlorpromazine, even though it is called antipsychotic medication, any apparent antipsychotic effect may be far less obvious than parkinsonism, which is called a side effect. Similarly, as another example, the gut effects of an SSRI antidepressant, even though generally short-lived and seen as side-effects, may be more obvious that any so-called antidepressant action. Furthermore, it is not always easy to decide whether an adverse reaction is caused physiologically, rather than psychologically, by the drug.

Besides prescribed harm, more generally, psychiatry, despite whatever good it may do on occasions, has always caused harm, including the abuse and neglect of people. For example, one of the main reasons traditional asylums were closed was because the conditions under which people were kept could be appalling and disgusting. Psychiatric practice may not always be very ethical (eg. see my book chapter). As I've kept saying in this blog, psychiatry has a tendency to reduce people to objects, and not treat them as people but things. I'm not saying psychiatry can't do good (see eg. previous post), but working alongside abuse and neglect in psychiatry, not just in its history, may not be easy (see eg. my article).

I, therefore, can understand the anger of the prescribed harm community in psychiatry. Some of them gain more support from each other online than from psychiatry. Psychiatry needs to engage properly with this issue and it's more than just an issue about antidepressant withdrawal (see previous post).
Posted by DBDouble at 5:29 pm