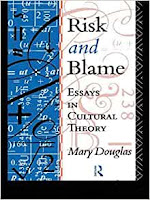 I've mentioned before (see previous post) that the over-preoccupation with risk in mental health services in the last 20 years or so has been counterproductive. This is relevant to the current review of the Mental Health Act (MHA) (see another previous post). The new MHA needs to reduce coercion in mental health services and risk is not always best handled by increasing coercion.

As I wrote in my book chapter, one of the reasons for the rundown of the traditional asylum was the mistreatment of patients in a number of institutional scandals. These traditional services needed to be opened up and patients moved more to the community. I've argued that the recent scandals of Winterbourne View and Whorlton Hall should similarly lead to the prohibition of any further civil psychiatric detentions to secure facilities (see previous post), so that these people if they need inpatient treatment should be managed in open door wards. A secure environment is unsuitable for most people with learning disability or serious mental illness. The new Mental Health Act must deal with abuse and over-restrictive practices within services.

As I also wrote in my eletter, many psychiatrists were opposed to the rundown of the asylum and the development of community care because of their, at least perceived, loss of power in the traditional hospital. There is no longer an active debate about whether the asylums should have been closed, because the process has been completed. But at the time, because of the relatively high level of mental illness amongst the homeless population, it was argued that patients were being discharged irresponsibly from the traditional asylums ‘onto the street’. However, follow-up studies of discharged patients (such as TAPS eg. see my book review) showed that the rundown of the psychiatric hospital, at least in the UK, was not the main factor contributing to the numbers of homeless mentally ill. The tack of campaigning organisations, such as SANE, therefore, changed to blaming dehospitalisation for homicide by psychiatric patients, leading to a focus on public safety. High profile media cases, such as the death of Jonathan Zito, who was stabbed in a tube station by Christopher Clunis, led to the formation of the Zito Trust. The new Labour government concluded that community care had failed. Any homicide by a psychiatric patient had to be investigated, despite the fact that homicides by psychiatric patients had not in fact increased. There is no standardised approach to such inquiries, however, (see Ng et al, 2020) and many of them have been destructive (see my unpublished paper).

The current reform of the Mental Health Act has to be understood in the context of the last attempt to reform it, which led to the 2007 amendments. The introduction of community treatment orders (CTOs) then was hailed as saving lives, with fantasy estimates of how many suicides and homicides would be prevented. Of course there is no evidence that CTOs have reduced deaths (see eg. previous post) and they should be repealed (see another previous post).

The forensic theory of risk comes from Mary Douglas (1992). Talk about risk is a political process. Debate about accountability is a contest to muster support for one action rather than another. People pressurise each other in society and a conformity is created. The charge of causing risk is a stick to beat opponents. Ulrich Beck (1992) advocated in his book Risk Society that science needs to stop pretending it is neutral. It needs to become more conscious of its political nature. As I said in my talk:-

There is a debate about the balance between risk taking and risk aversion. If anything, what the Risk Society seems to mean is a shift towards the risk aversion end of this relationship. The word risk has been pre-empted to mean bad risks. The promise of a good political outcome is couched in other terms. Yet any society which did not take risks would not be making the most of its opportunities for growth. Over-cautious risk-averse behaviour can be crippling.

The new Mental Health Act again needs to open up debate about the balance between risk taking and risk avoidance. The 2007 amendments were an aberation in progress towards freeing up mental health services started by the 1959 and 1983 Acts. Risk aversion is leading to too many people being detained for too long and inappropriately and forced to have treatment when it is not benefitting them. This situation needs to change and the White paper does not go far enough to correct it.