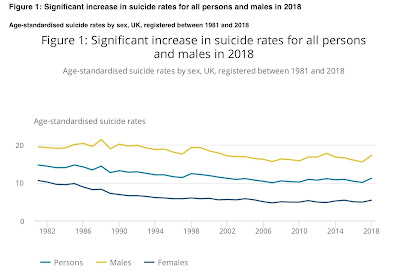 Jacob Hess comments in an MIA blog post on a NYT Op-Ed essay entitled Why are young Americans killing themselves? In the UK, despite having a low number of deaths overall, rates among the under 25s have generally increased in recent years (Office for National Statistics, 2019).

Despite some yearly increases (including 2018, the first increase since 2013), suicide rates for all persons have generally decreased since 1981 (see figure). Over this time frame, it is particularly in the over 60s for men and the over 45s for women where this is apparent. Suicide reduction has primarily happened for older people. I'm not saying the recent increase for young people is not of concern but it does need to be set in context. Many factors contribute to trends in suicide rates which can be very difficult to disentangle.

I agree with Jacob Hess that the solution to suicide in young people is not as simple as the Op-Ed piece makes out. It asks, "How is it possible that so many of our young people are … killing themselves when we know perfectly well how to treat this illness?" It then goes on to state that "We know that various psychotherapies and medication are highly effective in treating depression."

Public mental health strategies should not be driven by exaggerated claims for the effectiveness of psychiatric treatment. For antidepressants, for example, there are substantial non-response and recurrence rates (see previous post) and the difference between active and placebo treatment in clinical trials is much smaller than most people realise (see eg. another previous post).

The readiness to use antidepressants in children has increased over recent years (see my BMJ letter) as the concept of childhood depression has been socially constructed (see previous post). Concerns about lack of efficacy and increased suicidality created a hiatus in 2004 in the relentless continuing increase in antidepressant prescribing for children. I suspect that children and young people object more than adults to the medicalising of their mental health problems. We do need to look wider than psychiatric treatment to helping suicidal young people.
Posted by DBDouble at 1:26 pm