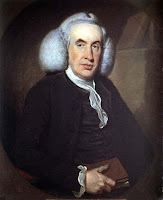 As I mentioned in my last post, probably the first person to speak of functional disorders was William Cullen (1710-1790), a key figure in the Scottish Enlightenment. As Sean Dyde says in his article,


While for ... Cullen the body could not be explained as if it were a machine, nor could ... [he] agree with the animism of Georg Stahl (1659–1734), that all bodily functions depended upon some rational principle or soul (see eg. previous post).

As far as hypochondriasis is concerned, Cullen saw it as

a disorder that affected some of the most important powers in the body. In other words, it was not its distinct nervousness which made hypochondriasis unique, but its combined effects on the vital and intellectual functions.


However, by 1820 a change had come upon British physicians and surgeons. Many believed that Cullen’s medicine was in need of revision, that the motivating powers had no place in classifying disease, that medicine could be given firmer foundations.

It was said that the underlying disease was being missed too often. Illness or disorder was an “unhealthy state of the feelings or functions of parts”, and more attention needed to be paid to the “visible alteration in the appearance or structure of the affected part“. As Dyde says, “What had changed was the meaning of the term ‘disease’”. Pathological anatomy was starting to reform medicine.


For an ailment such as hypochondriasis, already on the cusp of medical understanding, pathological anatomy only made its ambiguities more prominent. ... [T]here was an acknowledgement that the time had passed when great figures like Cullen could survey the entirety of medical practice and encapsulate it within a single work. Where for Cullen the precise nature of disease was relatively unimportant, for pathological anatomy the question was all-consuming.


British physicians in the 1830s were little different from their colleagues in the 1760s: unable to distinguish the myriad of nervous ailments which they faced in medical practice, and fully aware that the conceptual tools at their disposal were unfit for the task.

But pathological anatomy had darkened Cullen’s reputation. Nonetheless, Cullen was “an astute physiological and medical thinker, as well as a remarkably influential nerve doctor” and “remains significant today for the warning ... [he] provides against reductionisms”.
Posted by DBDouble at 9:44 pm