Was Foucault for or against the Enlightenment? 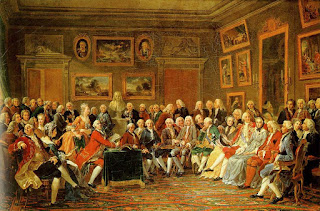 If we accept the standard interpretation that the History of Madness describes a continuous process of exclusion of madness which began in the Renaissance and lasted all the way to the late 19th century, then we are forced to deduce that the birth of the asylum which took place in what is called the Enlightenment, is a mere episode of this linear narrative, albeit one focused exclusively on insanity. In this case we are faced with a choice; if we side with the Enlightenment, we conclude that, after a long period of ignorance, prejudice and religious superstition, mental doctors finally reached a sufficient level of lucidity to insert insanity into the calm objectivity of science. No doubt an exclusion took place and harsh therapeutic methods were employed, but this was because psychiatry was still in its infancy. If, on the other hand, we consider the same narrative as anti-enlightenment and anti-psychiatric, we can conclude that the birth of psychiatry was the direct result of an oppressive rationalist and moral imperative to exclude and conquer Unreason. Lacking scientific rigor and being part of the larger project of suppressing madness, proto-psychiatry failed to treat insanity in accordance with the supposed humanitarian ideals of the Enlightenment.

This is the ‘blackmail of the Enlightenment’, that is, the question of whether one has to affirm or reject rationalism. Taking sides in this dilemma must necessarily rest on a value judgment and on ready-made concepts (for example, considering a priori exclusion as a social evil, or objectivity as the ultimate goal of science). Foucault, however, refuses to submit to this blackmail and decides to treat the Enlightenment in its own terms. For Foucault, the birth of the asylum is a unique, groundbreaking event in the history of western medicine, because the doctors of this period tackled madness first and foremost as a concrete anthropological problem. Part of a vast transdisciplinary domain in the late 18th century, alienism gave medical expression to the new anthropological mentality of the time, that is, the ‘strictly philosophical structure responsible for the fact that the problems of philosophy are now lodged within the domain that can be called that of human finitude’. Madness was the case of human finitude par excellence, the most alien experience, challenging ‘our very sense of what it means to be human’, as Scull rightly puts it, therefore it had to be assessed in its own, singular truth, free of all preconceived value judgments, naturalist or moral theories. If the alienists were ‘enlightened’, it was because they adopted a ‘limit attitude’ which permeated their theories and determined their practice. Let us follow Foucault’s historico-philosophical analysis of this phenomenon:

1) During what is called the Enlightenment, the criteria of rationalism, productivity and morality which had led to the Great Confinement, no longer applied, and the practice of massively and indiscriminately incarcerating individuals began to disintegrate. (Even if we accept that the great confinement never existed, there is ample evidence in the medical textbooks, the architectural planning, the legal context and the administrative framework of the time, that the French, English, or German early 19th century asylum was a novel and unique medico-anthropological institution). Also, the Enlightenment did not reinforce the scientific and experimental powers of man, which should normally lead to a continuation and deepening of the existing naturalistic and biological theories of the previous times. Instead, no new substantial naturalistic theories of madness were produced during this period, or at least they were minimal compared to the biological and psychological theories of the positivist (or scientistic) revolution 100 years later.

2) The exclusion of madness was primarily tied to a specific problematic of anthropological truth. To the political interests of the late 18th century (discipline, public hygiene), insanity presented a deep anthropological problem: why and how did madness pose limitations to the application of reason in society? (If certain individuals cannot be trained, educated or corrected, then there is an inhuman kernel in them resisting rationalization). The doctors of the time who were asked to respond to this question did not belong to an Enlightenment ‘movement’; they simply translated the general socio-political and philosophical anthropological problematic of their society, into medical language. They tried to examine, in clinical terms, the question: how can moral codes or psychological laws be applied to the mad individual who represents the impossibility of thought (Descartes)? Isn’t the study of the reasons why an insane individual fails to participate in the reasonable community of men, the condition of possibility for the empirical investigation of his ailment (Kant)? Thus, the alienists shifted the center of gravity from the age-old investigation of humoral aetiology to the anthropological examination of the mad subject and his truth and freedom. The result was a new nosographic and symptomatological field, a strict phenomenological description of signs and symptoms denoting experiences impervious to education, training or punishment - experiences at the margins of reason.

3) Importantly, this was the first time that medicine opened a dialogue with madness (reading Foucault’s two sets of lectures on psychiatry in the 70s, one has the sense that Foucault corrects himself or at least supplements his own earlier thesis on psychiatry’s ‘monologue on madness in the late 18th century’). The alienists were attentive to the truth that the mad discourse expressed. They isolated the mad individuals so as to listen, without distraction and outside interference, to their illusory, fantastic discourse, responsible for their alienation. (From the studies of Goldstein and Gauchet & Swain, up to recent research, it has been consistently shown how carefully the doctors of the time listened to the enigmatic speech of the patients, tried to decipher their discourse, manipulated their delirium (see for example, Huertas, 2014)). In fact, analyzing the methods of confinement and treatment in the proto-psychiatric period, methods which may appear unacceptable to the current psychiatric mind (Esquirol’s principle of isolation, Falret’s principle of the two wills), Foucault - especially in his Psychiatric Power lectures - shows no hostility or opposition; on the contrary, he seems to appreciate the rationale underlying those practices whose end goal was the revelation of the truth of delirium. The same goes for the ‘moral treatments’ of the time; attaching the mad individual to the procedures of discipline did not abolish the humanity and morality of Pinel, Willis or Tuke (unless we accept that disciplinary power is by definition enslaving); the aim was rather to identify and neutralize the insane beliefs using techniques whose application is possible only under conditions of protection and isolation.

Interestingly, Foucault’s criticism of psychiatry targets the post-anthropological, post-Enlightenment form that psychiatry has acquired since the late 19th century, a form which the rationalist optimists may view as the fullest expression of the Enlightenment: inclusion of madness instead of exclusion, increased scientific sophistication, humanitarianism, security. Foucault, however, sees in this process the intensification of rationalization and its inherent dangers, rather than the fulfillment of an Enlightenment ‘ideal’. Abandoning its anthropological focus on delirium as the heart insanity, psychiatry has sought to reduce illness to somatic localization, an effort which, instead of strengthening the epistemological status of psychiatry, has actually produced phenomena of lower scientificity and even abuse (perhaps even much greater than that which may be observed in the early 19th century asylums). Defining mental illness not as a disturbed relationship with truth, but in terms of its reality, that is, the voluntary and the involuntary, neurological disturbance and genetics, psychiatry has extended the scope of its application to all possible abnormal behaviors, becoming a science of abnormalities (today, one needs only to look at DSM-5 where more and more aspects of human behavior receive a medical comment, and the notion of the spectrum has officially entered the scene); genetics has been coupled with totalitarian and ideological practices giving justification to racism; the doctor-patient relationship is downplayed in favor of impersonal bureaucratic practices and the quest for the truth of illness in the laboratory; forensic psychiatry is asked to provide expert opinion on the danger of insanity, overstepping the epistemological boundaries of medical science, since dangerousness is neither a medical nor a legal concept.

By way of conclusion let us note the following:

a) The early asylum does not constitute the embarrassing past or the infantile beginning of psychiatry; but neither does it represent a romantic origin to which we should nostalgically return. As Foucault notes, quoting Nietzsche, things are not ‘most precious and essential at their moment of birth’. (Nietsche, Genealogy, History). Its genealogical value lay in its epistemological lessons: psychiatry can never escape its inherent connection with the philosophical problem of madness, just like medicine in general is intrinsically tied to the metaphysical problem of death.

b) Foucault does not deny the reality of madness (‘I have never said that madness does not exist, or that it is only a consequence of these institutions. That people are suffering, that people make trouble in society or in families, that is a reality. What I have tried to analyse are the ways these conditions, and the context in which this kind of suffering—delirium, persecution, etc.—are problematized as an illness, a mental illness, something which has to be cured inside such institutions and by such institutions.’ or ‘when I say that I studying the ‘problematization’ of madness, crime and sexuality, it is not a way of denying the reality of these phenomena. On the contrary, I have tried to show that it was precisely some real existent in the world which was the target of social regulation at a given moment (Fearless Speech)). The lesson he draws from the early anthropologists-alienists is that studying the reality of mental illness presupposes the study of its truth. This is because: 1) Diagnosis precedes aetiology. We look for somatic or psychic causality - but what is this causality the causality of? 2) the patient is part of the human species with a nature which can be studied anatomically and statistically. But only the concrete individual, with his delirious relationship with truth, ‘continues to tease and to bewilder us, to frighten and to fascinate, to challenge us to probe its ambiguities and its depredations.’ (Scull) 3) the doctor-patient relationship cannot be neglected, not for reasons of morality, but because, madness does not have only universal, somatic (not only cerebral) causes, but also a unique individual expression, a singular mode of existence, which can only be revealed in a specific milieu and in the specific relationship with the particular examining phychiatrist.

c) Scull’s assertion that ‘madness has social and cultural salience and importance that dwarf any single set of meanings and practices’, could be rephrased. Madness provokes a gigantic battle around truth, where multiple practices, knowledges and interests engage in the mutual construction of a single meaning: ‘in what way does a society define its relation to madness?‘

d) In fact, for Foucault, in the Enlightenment this belligerent relationship ‘between power, truth and subjectivity’, reached ‘the surface of visible transformations’; which is why it is ‘a privileged period for historico-philosophical work,’ and we should try to see whether ‘we can apply this question of the Aufklarung to any moment in history, that is, the relationship between power, truth and the subject’. In this sense, it could be argued that Foucault is actually for the Enlightenment, provided that the Enlightenment is conceived as a critical and diagnostic way of thinking and not as a moral and rationalist movement laying claims to Universality.

John Iliopoulos is consultant psychiatrist and chairman of the Department of Philosophy and Psychiatry at the Hellenic Psychiatric Association. He is the author of The History of Reason in the Age of Madness (2017)
Posted by DBDouble at 8:43 am