Adoption of the term ‘schizophrenia’ 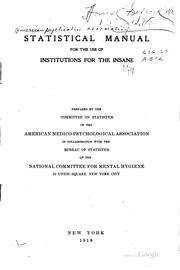 As I've mentioned before (eg. see previous post), Adolf Meyer understood the problem of the reification of psychiatric disorder. He resisted the need to have a formal psychiatric system because there was insufficient knowledge to be able to do so and he was worried it would wrongly create too fixed entities. The Statistical Manual for the Use of Institutions for the Insane (1918) was the first formal diagnostic manual adopted for widespread use in the USA, well before the first edition of the Diagnostic and Statistical Manual in 1952.

At the time of the publication of the 1918 manual, the term ‘schizophrenia’ (from Eugene Bleuler) was already starting to replace 'dementia praecox' (introduced by Emil Kraepelin). Richard Noll (who I’ve mentioned previously) discusses a 1919 paper based on a lecture by Ernest Southard (again, who I’ve mentioned previously) in a History of Psychiatry classic text. By 1919, Kraepelin himself seems to have given up the term ‘dementia praecox’. Ideas about dementia praecox being a disease caused by autointoxication, including by Kraepelin, were thought unlikely by Southard, even though Southard thought he had evidence for structural abnormalities. Nonetheless, he preferred the term schizophrenia because basically neither 'dementia' nor 'praecox' were indispensable features of what was called dementia praecox.

Trouble is that there are problems with the term 'schizophrenia' as well, which following Meyer's perspective is to be expected. Psychiatric diagnoses are not entities or "things". Over recent years, the more generic term 'psychosis' tends to be used. For example, the chairs of the Critical Psychiatry Network called for use of the terms 'psychosis' or 'madness' because the concept of schizophrenia is neither valid or useful (see previous post). Even Mary Boyle,  who argued for the abandonment of psychiatric diagnosis, reluctantly adopted the word 'psychosis' as a substitute for 'schizophrenia' in order to discuss the topic to which psychiatric diagnosis refers (see another previous post).

Remember that even Bleuler thought that schizophrenia was caused by an unknown organic cause. Jim van Os, for example, makes a case for abandoning the term 'schizophrenia' because of its association with suggestions that it is a distinct, genetic brain disease (see previous post). He wants to introduce a 'broad and heterogeneous psychosis spectrum syndrome'. I'm all for abandoning the notion of 'schizophrenia' if it leads to mental illness not being seen as a brain disease. Standard teaching is that schizophrenia originates from disruption of brain development caused by genetic or environmental factors, or both (see another previous post). If you look at these sort of statements, though, you will normally find (although not always) some qualification that this hypothesis seems to be the case, rather than necessarily being proven. Trouble is that even official bodies, like the American Psychiatric Association, don't always make such statements as cautiously as they should do (see previous post).

There is an inevitable issue about what 'schizophrenia' means if we are going to use the term (see previous post). Let's at least give up the idea that we can expect to explain functional mental illness, like schizophrenia, in physico-chemical terms (see eg. another previous post).
Posted by DBDouble at 4:56 pm