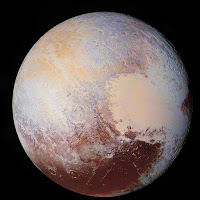 Peter Zachar & Kenneth Kendler (2012) discuss the parallels between removing Pluto from the list of planets (see eg. youtube video) and removing homosexuality from the list of mental disorders. Both decisions were made by a vote: on 24 August 2006 members of the International Astronomical Union voted to remove Pluto from the official list of planets; on 15 December 1973 the Board of Trustees of the American Psychiatric Association (APA) voted to remove homosexuality from the official list of mental disorders, and this decision was subsequently supported (by a narrow margin ie. 58%) in a vote of the whole APA membership (of which only 25% voted). One of the differences between the cases in astronomy and psychiatry was that the Pluto decision was not put out to a wider vote.

Zachar & Kendler do say that a "compelling argument can be made that Pluto never should have been classified as a planet", but I can't see that it could have been foreseen that the definition of 'planet' would change.

There is an argument that the definition of mental disorder was wrongly changed in DSM-IV, in that the functional/organic distinction was abolished (see previous post). Robert Spitzer (2001), who chaired the task force for DSM-III, that removed homosexuality from the manual, always maintained that DSM-III took a neutral approach to causation and that it is not covertly committed to a biological approach to explaining mental illness. There is truth in this observation. DSM-III's primary motivation was to introduce operational criteria to replace what it considered to be vague and imprecise definitions of mental disorder. True, it was associated with reaffirmation of an implicit “medical model” with a focus on brain mechanisms and a positivistic approach to science, but the link between DSM-III and biological aetiology is merely associative, not necessarily logically causal. A classificatory system in itself is not necessarily biomedical. This is illustrated by the fact that DSM-I was influenced by the reaction types proposed by Adolf Meyer, despite Meyer's concern about the general over-emphasis on psychiatric diagnosis (see my book chapter). In fact, Meyer had "no use for the essentially ‘one person, one disease’ view”  and regarded the “…statistics published…[as] a dead loss…and an annual ceremony misdirecting the interests of staff”. DSM-5 did set out to change the definition of mental disorder but failed (see eg. previous post).

The real problem, though, is the reification of psychiatric disorder. Apart from organic disorders, mental disorders are not concrete entities, like Pluto. There will inevitably be limitations in the application of psychiatric diagnosis, whatever way symptoms and signs are grouped and conceptualised. Psychiatric practice needs to acknowledge this state of uncertainty. The concepts of psychiatric disorder do not need to be abandoned for this reason. They merely need to be recognised for what they are, as attempts to describe prototypical or ideal types of psychological states. They are merely idealised descriptions of those aspects of reality that interest us. As unobservable hypothetical constructs they are not capable of description in a natural scientific sense (see eg. my article).

Psychiatric diagnoses are simply categories justified by clinical utility. They are working concepts for clinicians. The value-laden nature of psychiatric diagnosis is not a sign of scientific deficiency but of its meaningful nature. We must stop too easily assuming a functional mental disorder is an entity of some kind and thereby using such an association as a justification for treatment. To quote from Adolf Meyer (see my paper):

Interesting points, I guess another way of saying it is that an emphasis on "symptoms" doesn't *necessarily* entail a biomedical point of view on it all?

I guess I wonder what kind of framework that calls into question though, since "abnormal" feelings/behaviors have to be defined in contrast to non-abnormal (or simply normal) ones...how does one do that without a flight into either ethical norms such that defined homosexuality as deviant *or* a bio-reductionistic model?