The nature of factors in the causation of mental illness

Thomas Fuchs (2011) makes the argument that reduction of mental illnesses to diseases of the brain is not possible in principle. As he says, "The use of 'brain language' is increasingly permeating our self-conception". For example, neuroimaging studies that literally 'light up the brain' are taken seriously (see eg. previous post). As another example, psychiatrists' compulsion to believe the evidence for a strong genetic component in conditions such as schizophrenia, has been reinforced by modern molecular studies building on family, twin and adoption studies (see guest previous post), despite the genetic case having been used for the sterilisation and extermination of the mentally ill in the past (see eg. Patrick Hahn's lecture and his book Hahn, 2019)

The reality is that altered subjective experience and disturbed reactions to others are essential elements of mental illness and not mere epiphenomena of a causal organic process. Subjective modes of experience and behaviour of course are enabled by neuronal processes. But neuronal processes are not meaning making and lack intentionality. As Fuchs puts it, "If neuronal processes function as 'carriers' of intentional acts, they can do so only as part of an overarching life process that includes the organism as a whole and its environment". People cannot be investigated as machines in the same way that their brains may be when they are considered in isolation or as part-functions (see another previous post). As Kant said some time ago, the link between mental and physical is an enigma that can never be solved (see eg. another previous post). Mental processes are enabled or realised by neuronal processes, but may not be localisable in the brain. We should give up trying to explain mental illness in physico-chemical terms (see eg. previous post). It needs to be understood in interpersonal context.

In this situation, Fuchs argues for a circular causality of living systems. Circular causal processes are tied to mediation by the brain, but cannot exclusively be located within it. The whole organism is the condition of its parts, but is in turn realised by them. Cause and effect cannot, therefore, be assigned to separate agents acting externally on each other. We can only hope for formative causal influences, not efficient causality. Efficient causes at the level of physics and chemistry require formative causes at higher levels.

I still like Adolf Meyer's such understanding of science (see my book chapter):- 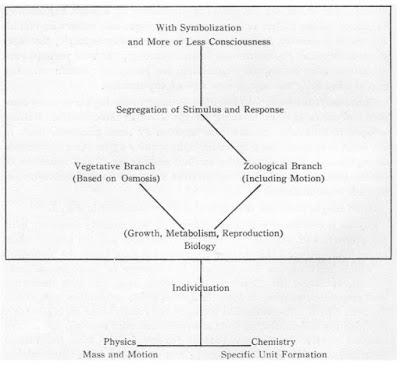 Lower or simpler categories are pertinent to but not explanatory for higher or more complex categories. Chemistry and physics are relevant to biology but the 'lower' sciences do not provide an adequate explanation for biological phenomena, which require a different explanation. The different levels are relatively discontinuous because of qualitative differences in their subject matter and limitations in the methods of study. Individuation first appears in biology beyond physics and chemistry. Within biology are the divisions of botany and zoology. Human beings emerge as a special and a higher biological product. The unitary organism is mentally integrated through symbolisation, which is the meaningful representation of time-bound experience, and through consciousness, which is the awareness of personal activities. There is a matter of degree rather than absolute separation of conscious from 'not-conscious'. Meyer failed to make his system explicit, but I think psychiatry would have done far better to build on his heritage rather than keep repeating its mantra that it's got loads of data demonstrating biological and genetic abnormalities in major mental illness (see previous post).
Posted by DBDouble at 11:56 am