Critical psychiatry is not neurophobic

An article by Bullmore et al entitled Why psychiatry can't afford to be neurophobic followed up Craddock et al's article mentioned in my last post. It suggested that "there seems to be a deep-seated reluctance to embrace the theoretical and therapeutic potential of neuroscience for psychiatry".

I don't think this reluctance comes from critical psychiatry as such. It has always emphasised the integration of mind and brain. It's a mistake to think that mental symptoms are not based on a neural substrate. Critical psychiatrists can understand the wish, as much as anyone else, that neuroscience could solve the theoretical and therapeutic problems of psychiatry.

The problem is that fulfilling that wish is "intellectually bold" in Bullmore et al's own words. They are fearful that psychiatry will be cast "adrift from the core principles of medicine". They can't understand why anyone would want to prescribe psychotropic medication without thinking that symptoms were "somehow related to abnormal synaptic signalling between nerve cells".

Correspondence in reply (eg. by Andrew Blewett) sees through this argument. Neurohawkishness seems to be on the defensive.
Posted by DBDouble at 10:41 pm No comments:

Is there a debate about the future of psychiatry? 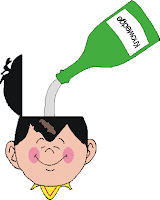 All in the Mind broadcast a programme that included a debate between Nick Craddock and Pat Bracken. It suggested there was a fierce debate within psychiatry about the very future of the profession.

I think the origin of this so-called debate is supposed to be an article by Craddock et al entitled "A wake-up call for British psychiatry". It has been portrayed as a biomedical reaction to the policy of New Ways of Working.

I think the issues are more complex (see my e-letter). There has been a deprofessionalisation of services in the sense of an undermining of professional expertise. New Ways of Working encouraged a fragmentation of services and, in fact, Department of Health policy now seems to have moved on to focusing on the "creative, capable workforce" and not so much about the structure of services.

The question is whether there is really a debate about the conceptual basis of psychiatry. Pat has always tended to argue that postpsychiatry is not another model (eg. see Openmind article). I may have misunderstood the implication of Pat's point but I do think there should be a debate about whether psychiatry has a biomedical or truly biopsychosocial foundation. "Biopsychosocial" may not be the best term as it has been used to mean an eclectic, atheoretical position. But I think critical psychiatry is clear that psychiatry can be practiced without postulating brain pathology as the basis for mental illness. That is a debate worth having but I haven't seen much engagement in it.
Posted by DBDouble at 7:33 pm 1 comment: