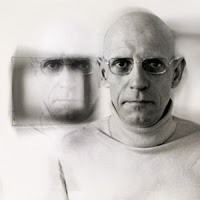 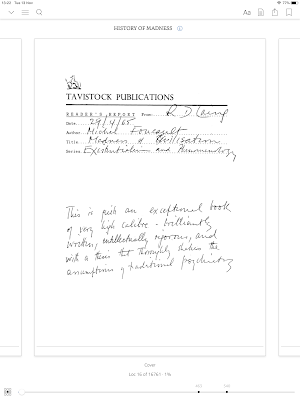 Jean Khalfa, in his Introduction to his edited edition of Michel Foucault’s History of Madness, says that the book “has yet to be read”. Certainly I haven’t made an attempt to read it until of late. I have been too influenced by the “cursory caricature of Foucault’s work”, to which, as Colin Gordon suggested, even Roy Porter was prone (see Gordon’s review of History of Madness). Andrew Scull’s TLS review has been particularly misleading about the value of Foucault’s work (see, again, Gordon’s response to Scull). Even R.D. Laing’s enthusiastic reader’s report (see image above) for publication of the abridged version, Madness and Civilisation, may have given the wrong impression. Gordon wonders whether Scull has really read the book and Laing’s brief report (I presume this was all he submitted), again, makes me wonder whether he even read the abridged version.

Laing was right, nonetheless, that this is “an exceptional book of very high calibre”. As Gordon says, the book “is the work of a young genius, a work of masterful accomplishment and prodigious and prodigal energy, grasp and daring”.  More needs to be made of it (see previous post).
Posted by DBDouble at 1:51 pm No comments: