Schizophrenia is not a neurodevelopmental disease

Professor Sir Robin Murray confesses to mistakes in an end of research career mea culpa (see article). He questions whether schizophrenia is a neurodegenerative disease and accuses psychiatrists of refusing to accept the evidence, clinging to the "nihilistic view that there exists an intrinsically progressive schizophrenic process". This is what he believed once! He makes much of the fact that he did not sufficiently take into account the effects of medication. He even admits that he was surprised the neurodevelopmental theory of schizophrenia achieved such widespread acceptance. As far as he is concerned, saying that schizophrenia is a neurodevelopmental disease is at least overstatement, with the evidence against it.

Murray also admits that he ignored social factors in the aetiology of schizophrenia for 20 years. Like me (eg. see previous post), he points out that even social psychiatrists, such as Paul Bebbington and Julian Leff, tend not to regard social factors as causal.

Don't think, though, that this means Murray is saying critical psychiatry was right all along. He still believes the "final common pathway underlying psychosis is excess synthesis of presynaptic dopamine". His recommendation to newly qualified psychiatric researchers is to throw themselves into "examining gene x environment interactions and epigenetics", or if they are not clever enough, to go instead into neurochemical imaging, because "at least the pictures of the brain are pretty". The silly chump also still promotes ideas such as tobacco use causing psychosis (see eg. previous post).
Posted by DBDouble at 1:16 pm 19 comments:

The Philosophy Special Interest Group of the Royal College of Psychiatrists has asked for submissions for its conference next year on Philosophical issues in psychedelic drug use (see call for papers). It's interesting to look at what motivates this focus.

As I said in my book chapter in Liberatory Psychiatry, Tom Wolfe's book The electric kool-aid acid test acknowledged the expansion of the limits of immanent experience through psychedelic drugs. Ken Kesey who, with his Merry Pranksters drove across America in a brightly painted bus, was the author of One flew over the cuckoo’s nest. This accomplished novel depicts Randle McMurphy’s attempt, apparently on behalf of the counterculture, to overthrow the bureaucratic control of Nurse Ratched in the psychiatric institution. It was made into a successful film starring Jack Nicolson.

The blurb for the conference states that "Neuroimaging studies are revealing how changes in brain function can lead to the particular changes in emotional and cognitive experiences produced by psychedelic drugs. These findings may be relevant to our understanding of psychoses and other abnormal mental states." I'm not sure what neuroimaging studies it is referencing, but I agree that the overlap with psychosis is what makes the topic interesting. The blurb goes on that psilocybin and LSD "have been used on a trial basis in a range of psychiatric disorders including depression, PTSD and ‘existential anxiety’ in people with terminal illnesses". R.D. Laing, perhaps the most famous of the anti-psychiatrists (see eg. previous post), used LSD in treatment.

It is interesting how the strands of anti-psychiatry were interwoven with the 1960’s counterculture. Laing's perspective that civilisation represses transcendence and so-called ‘normality’ too often abdicates our true potentialities cannot be completely divorced from the use of psychedelic drugs.

The interest in psychedelic drugs came not only from anti-psychiatry but also from mainstream psychiatry, such as William Sargant. He reviewed The doors of perception by Aldous Huxley for the British Medical Journal. It seems likely he was involved with trials of LSD as a truth serum at Porton Down between 1953-5 (see BBC News story).

These historical aspects are of interest and require further elucidation. I'm not quite sure what the relevance of psychedelic drugs are to current psychiatry.
Posted by DBDouble at 9:58 pm 3 comments:

The value of anti-psychiatry 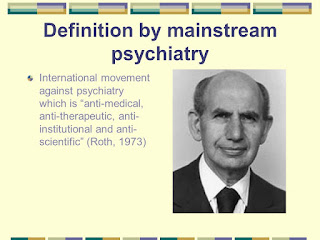 RSM videos have recently uploaded a lecture by Tom Burns (see previous post) given earlier in the year on anti-psychiatry (see video). However simplistically, he at least thinks anti-psychiatry matters, or at least the work of Michel Foucault, Erving Goffman and R.D. Laing (see my book chapter). Despite what he says, there is even value in the work of Thomas Szasz (see previous post).
Posted by DBDouble at 6:15 pm No comments:

I used Kam Bhui's photo to accompany my previous post. Kam is editor of the British Journal of Psychiatry (BJPsych). In the past, he was chair of the Transcultural Special Interest Group of the Royal College of Psychiatrists, and, I thought, sympathetic to critical psychiatry.

I congratulated the previous BJPsych editor for publishing a special article a few years ago written from a critical perspective (see previous post). It is not always easy to get such articles published in mainstream journals. One advantage of the internet is that it allows free expression. However, it does mean that it can be difficult to distinguish quackery from mainstream science.

I have always argued for the mainstream presence of critical psychiatry. However, particularly over recent years, I have resorted to blogademia (see post on personal blog) to express my views. I don't think this makes my critical psychiatry blog any less scientific. But, we do need psychiatric journal editors to take a balanced perspective and be willing to publish critical articles. Considering my comments in my previous post, I'm not convinced that Kam is brave enough to do this. True, The Lancet Psychiatry editor published a letter of mine following a previous post. But, critical psychiatry needs to have more presence in mainstream psychiatry journals. Because of the bias against it, this process does need to be facilitated by journal editors. After all, having obtained the power of such influential positions, why not use it?
Posted by DBDouble at 1:10 pm 2 comments: