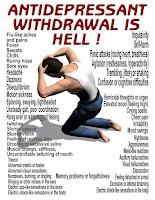 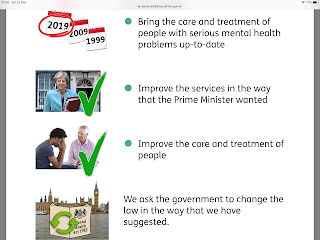 The Independent Review of the Mental Health Act 1983 (see previous post) has produced its final report ‘Modernising the Mental Health Act: Increasing choice, reducing compulsion’. It is disappointing, as Suman Fernando says in his blog, although not surprisingly so. It gets the government ‘off the hook’ of having to do anything about the observations from the Committee on the Rights of People with Disabilities about the UK government’s response to the United Nations Convention on the Rights of Persons with Disabilities (CRPD). The proposals made for change are minimal and will do little to prevent the unacceptable, including racist and abusive, treatment of detained patients (eg. see another previous post). CRPD is being ignored by suggesting that it prevents involuntary detention, which I don’t think is the case and in fact the Independent Review concedes this. Instead current legislation should be repealed and replaced by new legislation to preserve the dignity and respect of detained patients.
Posted by DBDouble at 11:13 pm No comments:

Peter Tyrer (who I have mentioned before, eg. see previous post) has recognised the value of critical psychiatry, however grudgingly, in his commentary on a BJPsych Advances article by Hugh Middleton & Joanna Moncrieff (also previously mentioned eg. see post). However, Tyrer thinks critical psychiatry is Luddite by hindering progress in psychiatry. Psychiatry has always had the forlorn hope that it will discover the biological basis of mental illness, and I don’t think that Tyrer has given up this wishful thinking. The examples he gives of progress in psychiatry include lithium for bipolar disorder and methylphenidate for ADHD, and these must be suspect, and even CBT for traumatic stress disorders is questionable.

Psychiatry, as well as human and life sciences in general (see previous post), need to take Kant’s explanatory anti-reductionism seriously. Kant was clear that it is absurd to expect to understand goal-directed mental disorder in physical terms. Epistemologically it’s just not possible. Consciousness is a puzzle we’d like to be able to solve but we can’t (see previous post). That doesn’t mean that we can’t study part-functions such as the brain, but we need an organismic psychiatry to treat the whole person. Such a view was present in the origins of psychiatry, such as Ernst von Feuchtersleben’s Principles of Medical Psychology (see eg. point (1) on previous post). Psychiatry needs to go back to its roots to make progress. Critical psychiatry is arguing for a positive way forward by promoting an organismic psychiatry. Psychiatry has never really been able to achieve this because of its dominant biomedical positivism.
Posted by DBDouble at 10:49 pm 5 comments: