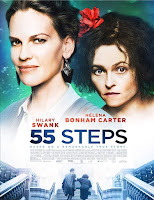 Essentially, the recent UK government's Independent Review of the Mental Health Act 1983 has failed to deal with this issue (see previous post), despite hearing considerable evidence of unacceptable, including abusive, treatment. Once detained, people essentially lose their rights and little account is taken of their will and preferences. This situation has been revealed by BBC Panorama in undercover reports at Whorlton Hall and Winterbourne View hospitals.

To be clear, I do recognise that people lack mental capacity at times. I also accept the need for involuntary intervention at times. What I'm arguing for is a Mental Health Act that preserves the dignity and respect of detained patients. The Independent Review will not lead to sufficiently rights-based reform. Maybe the film 55 Steps can encourage further discussion by focusing debate on whether forced treatment with medication can ever be justified. Under what circumstances would you accept this if you became psychotic?
Posted by DBDouble at 4:50 pm 4 comments:

Being honest about antidepressants

Adrian James, Registrar at the Royal College of Psychiatrists, said in his recent Radio 4 interview (see transcript) that “we need to have an honest discussion about side effects” of antidepressants. This  should go without saying and it’s helpful the College is being explicit. But I worry that James’ interview demonstrates, as I have said previously (see post), that the College is not making a significant enough concession on antidepressant discontinuation problems.

The reason James and the College minimise antidepressant discontinuation problems is because they want people to take their antidepressants if needed. The College exists as an institution to justify psychiatric treatment, such as antidepressant medication (see previous post).

James therefore emphasises that any side effects from antidepressants may be mild and self-limiting. He may be talking about side effects on starting antidepressants, as it is true that antidepressants are usually reasonably well tolerated, although not always so (and, again, the College has not made enough of the small number of people that do have a severe adverse reaction to antidepressants). But discontinuation problems are not always mild and self-limiting. The College has recognised that people can have severe withdrawal symptoms over a long period of time, but James insists this is “a very small number”, which I’m not convinced is the case.

It’s possible that Rachel Kelly’s experience is more typical (see her Times article). She says coming off the drugs after two significant depressive episodes, which left her hospitalised, was "terrifying". Each time she did so, she "feared she would relapse". She goes on, "Indeed the resulting anxiety was so high that I had to use other drugs, chiefly tranquillisers, to ease the process." As I said over 20 years ago in a BMJ letter, the "general public might reasonably expect psychiatrists specialising in disorders of the mind to recognise psychological dependence, base their advice on clinical experience, and use their common sense".
Posted by DBDouble at 11:34 am No comments: