Psychiatry should not fear the introduction of CRPD compliant services

Peter McGovern argues in a BJPsych article that rights and recovery-orientated services should be at the centre not the margins of psychiatry (see my twitter thread with quotes or amended quotes from the article). As the event details of the upcoming conference mentioned in my last post say, Mental Health Act reform needs to comply with the Convention on the Rights of Persons with Disabilities (CRPD) (see eg. previous post). CRPD recognises and promotes the use of supportive rather than substitute decision-making (see eg. another previous post).
The introduction of Seni’s law (see previous post) should encourage learning from incidents where services have had to resort to the use of force. Psychiatrists must stop endorsing traumatic clinical practice and coercing people into complying with treatments they may actually not find very helpful (see eg. previous post and yet another).
Posted by DBDouble at 9:53 pm 1 comment:

UK Mental Health Act reform: Can it deliver racial justice and ensure the rights and wellbeing of people with mental health problems? 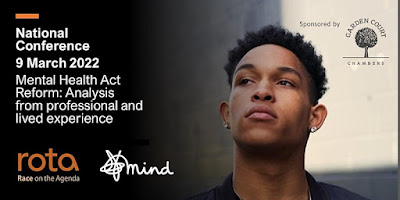 What does it mean that mental health has got worse in the pandemic? 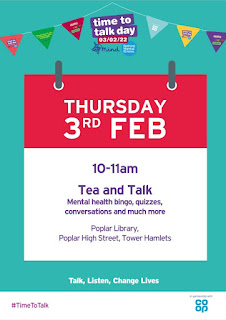 I thought I’d join what’s called the nation’s biggest mental health conversation, following Time to Talk Day recently. A survey in the East of England found that more than one in 6 adults who say their mental health has got worse during the pandemic have not spoken to anyone about it (see East Anglian Daily Times article). I suppose we shouldn’t be too surprised that 38% of respondents report a worsening of their mental health during the pandemic. As I said in a previous post, the impact of the pandemic should not be underestimated. The viral illness has led to deaths, together with lockdowns to prevent deaths, which have caused significant grief and disruption.

Lucy Foulkes, in her book Losing our Minds (see my review), notes how the conversation about mental health changed even before the pandemic. For example, Time to Change was a social movement, led by Mind and Rethink between 2007-21 to alter the way people think and act about mental health problems. Similarly, the Heads Together campaign of the Royal Foundation of the Duke and Duchess of Cambridge is typical of these kind of initiatives aimed at reducing stigma and discrimination about mental health problems by encouraging people to talk about them. But as Lucy Foulkes points out, despite these campaigns there is still limited understanding of what mental disorders are, what causes them and how they are treated.

As the Beatles said in their song ‘Help!’, we may well need someone when we’re not feeling so self-assured. But although the NHS promotes this song in its mental health campaign (see my tweet), I’m not convinced that people should necessarily be looking to the NHS when they feel so insecure. After all, the Beatles did say “Help! Not just anybody. Help!” [my emphasis]! Not that a suitable therapist may not be the right person to go to in such a situation. But someone else outside of services may be as well. We all need others at times. We might have more resources to be able to deal with our problems than we think. In fact it may not make much sense even to see dealing with the stresses and strains of life as a mental health problem. A lot of what mental health professionals actually do is help people understand and deal with their difficulties. People might just need pointing in the right direction if they can't make progress sorting out their problems without coming to services. That doesn’t necessarily require a commitment to undertake a personal therapy or the taking of medication.

Although there may not be a clear dividing line between normality and mental disorder, not all negative emotions and experiences should be labelled as mental disorder. Over recent years there has been a considerable increase in numbers of people seen by mental health services. But this rising demand does not necessarily reflect increasing need. Mental health services should prioritise those with the most need. In fact they seem reluctant to admit this. All I'm trying to do is help develop a better narrative. Although it has become common to blame the pandemic for long waiting lists and difficulty in accessing services, overmedicalising stress and unhappiness does not necessarily help (see previous post). I do worry about the rather oversimplistic message that services seem to be giving to people at times (see previous post). It seems counter-productive. Hopefully the pandemic will actually help us deal with these issues better.

Posted by DBDouble at 7:55 pm No comments: