I went to a talk yesterday by Lisa Bortolotti in the Cambridge University Psychiatry department (see tweet). This was based on her chapter in a recent book. Delusions are not necessarily un-understandable, nor always "bad for us", nor even particularly an exceptional way of thinking.

Picking up this last point from a previous post, we believe all sorts of things, partly often because there isn't clear evidence one way or another for some of the things we believe, eg. belief in God. We also live in societies where power relations can determine what we believe. In fact, following Foucault (see previous post), psychiatry had its origins in the Enlightenment with a focus on human rights, the questioning of dogmatic beliefs and the development of science, particularly social science. Reason itself now questioned the rational foundations of what is accepted as reason. Alongside reflection on the state of the human mind, alienists identified unreason and madness as an un-understandably, different state. The madman’s delusional thinking is central to this fundamental distinction between reason and unreason. Lisa Bortolotti usefully reminds us that this distinction is not really so absolute.

All this happened before the development of our modern understanding of disease (eg. see previous post). Although there has been progress since the middle of the nineteenth century in our understanding of physical disease, the functional rather than structural nature of mental illness has been difficult to appreciate in this context. The assumption that mental illness is due to brain disease, like delusional thinking, isn’t actually based on logic, but on faith, desire and wish fulfilment (see previous post). It seems to challenge our viability as psychiatrists to believe otherwise (see another previous post). This belief seems to be held onto almost with the same intensity as delusions.
Posted by DBDouble at 8:17 pm No comments: 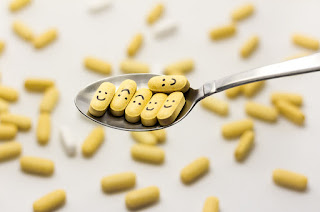 As The Times says, "Inflammatory and calumnious invective is unfortunately part of online discussion on many issues." I agree that scientific research should be based on evidence and I look forward to the report that will come out of the PHE review. I would like to see more discussion in the academic literature about antidepressant efficacy and discontinuation problems (see previous post). I would also like to see more academic discussion about the issues of safety raised by @Truthman30 (even though I tend not to agree with all he says). It's important to stick to the issues. It's also a privilege to be able to discuss these issues publicly on social media and this privilege should not be compromised. I'm glad to be able to do so on my blog.
Posted by DBDouble at 8:34 pm 1 comment: