Psychiatric drugs just as ineffective as other drugs 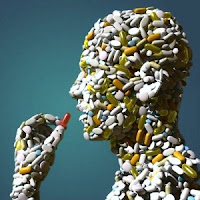 A BJPsych article, which claims it is the "first attempt to provide a panoramic overview of major drugs", concludes that psychiatric drugs are not generally less efficacious than other drugs. The paper has been commented on in a BMJ news item. The authors of the article note the questioning in the literature of the efficacy of antidepressants, cholinesterase inhibitors for Alzheimer's disease and lithium prophylaxis in bipolar disorder. They also reference a review of their own, which found "a smaller antipsychotic drug-placebo difference than we had intuitively expected".

They say these reports inspired an article in The New Yorker which summarised them. They then go on to suggest that a vocal antipsychiatry movement has been fuelled by this critique of psychiatric medication. To support their argument, they reference Medication madness by Peter Breggin and The emperor's new drugs by Irving Kirsch. I have mentioned the latter in a previous post. Actually, it's not anti-psychiatry to practice in an evidenced-based way. What people seem to be finding difficult is coping with the reality of the evidence.

The study confirms that the highest effect sizes in psychiatry come from withdrawal studies of maintenance treatment. This is higher than that found for acute treatment. As the effect size is small for acute treatment, it is possible the finding is due to an artefact caused by the fact that randomised controlled trials are not as double-blind as is commonly assumed (see, for example, From placebo to panacea: Putting psychiatric drugs to the test). The bias introduced through unblinding could potentially explain the results. As I have mentioned before (eg. see previous post), the higher effect size in withdrawal studies could be due to the nocebo effect of discontinuing medication compounding unblinding.

The fact that non-psychiatric drugs have similar effect sizes in clinical trials should not be interpreted as meaning that psychiatric drugs are effective, but that medical as well as psychiatric clinical trials are subject to the same biases of unblinding. Secondary prevention of cardiovascular events with aspirin or statins has even lower effects sizes than those for psychiatric treatment. It is possible that so-called "hard" endpoints such as death could be affected by these same biases (see, for example, my eletter).
Posted by DBDouble at 3:54 pm

Dr. Double writes: "The study confirms that the highest effect sizes in psychiatry come from withdrawal studies of maintenance treatment. This is higher than that found for acute treatment."

This is because the risk of withdrawal syndrome rises with chronic treatment, not because of a "nocebo" effect, Dr. Double.

I cannot stress strongly enough that your patients complain of withdrawal symptoms because withdrawal has destabilized their nervous systems, not because of the "nocebo" effect or psychological dependency.