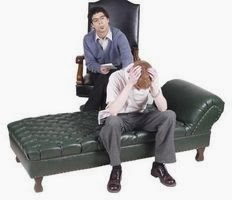 Dudas also makes reference to another qualitative study of the process of making sense of a diagnosis of bipolar disorder. This study again notes the ambivalence about the diagnosis. More should be made of this finding. Maybe patients are right to be uncertain about psychiatrists focusing too much on mood instability as a mental disorder. I am, of course, not saying that 'tranquility of the mind' may not be important for wellbeing but mood instability is not uncommon and may clearly be a reflection of personal difficulties rather than necessarily a mental illness as such.
Posted by DBDouble at 12:59 pm

Thank you for this article. Determining when mood swings become a mental illness is a very subjective task.

One thing I have noticed is that once a label of bipolar disorder is applied, very few mood changes are allowed. For instance, if a normal person flies down to Vegas to gamble his rent money away, he is merely foolish. If a person labelled bipolar does exactly the same thing, he's liable to be arrested under mental health legislation.

There may be, therefore, an exaggerated view of the permanence of this disorder. People can actually recover from all kinds of mental illnesses. The hopelessness that comes from accepting that one is permanently neurologically defective becomes a self-fulfilling prophecy.

"For people with bipolar disorder cure is unattainable and recurrence is inevitable" 2010 article by Inder et al. I challenge this statement and the Robert Dudas quote about bipolar disorder being a "major mental illness", from personal experience of psychiatric diagnoses/labels that I and other family members received. Also from views by other survivors who have had various psych labels at different and also have experienced "recovery".

My family all experience psychoses or altered mind states due to different reasons, stressors or body changes eg for me it was after childbirth and at the menopause. Stress doesn't cause me to be mentally unwell. For my 3 sons I would say it was due to transition between youth and adulthood, as they left home and boyhood behind. Unfortunately psychiatry did their utmost to infantilise and restrict the transition by forcing psych drugs on them, and on me. My middle son can swallow anything so he has been least affected by the psych drug cocktails, however my other two sons and I were either clinically depressed by them or had mood swings.

Chlorpromazine in 1978 and 1984 depressed me, it required biding my time then tapering and getting off the drug within the year each time. In 2002 the availability of psych drug cocktails tied me in and slowed my recovery. Risperidone depressed me, venlafaxine flattened me further, giving me suicidal impulses, then lithium (so-called mood stabiliser) kept me flat and zombie-like plus raising my blood pressure. I had to get back in charge and so I did, tapering and getting off, it wasn't easy. Took over 2yrs instead of just the one.

The only psych drug my middle son couldn't swallow was lithium which causes him to vomit. He takes sodium valproate but says it makes no difference to his moods, only takes it so as to "go along with" the psychiatrist. Where he lives it's used "historically" or so they say when I questioned the clinical lead about the drug cocktails. In other words they've always done it that way.

In 2002 the psychiatrist wanted me to accept the bipolar disorder label but I resisted so was given schizoaffective disorder which remains in my notes to this day although I am not a patient and have made a complete recovery. What's in a label? Two of my sons have bipolar disorder labels, the other who completely recovered after a year on psych drugs back in 1996, probably as a schizo label in his notes. When you've experienced a psychosis and are forcibly treated then they have to give you a disorder label of one sort or the other.

As for moods? I thought everyone had mood swings and it was part of living. I don't get much of them, only irritated and intolerant of mental health matters that don't make sense. Seeing the funny side is useful. My sons likely get more moody that I do. Getting older will sort that one out I should think. My youngest son tapered the psych drug haloperidol in 2012 which had been forced into, within 6 months, and is doing OK, considering what he has been through, in the name of psychiatry. I expect him eventually to make a "full recovery".

Empiric PPI therapy (a PPI trial) is a reasonable method to onfirm GERD when it's suspected in patients with typical symptoms.
A meta-evaluation discovered a exccessive likelihood
that non-cardiac chest pain responds too aggressive acid
suppression (22).