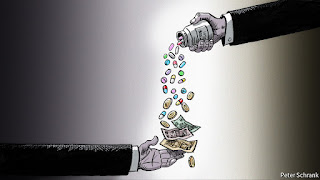 Institutional corruption develops when systemic practices, which are legal, accepted and normative, nonetheless undermine the integrity of the institution. Disclosure is insufficient to control conflicts of interest (see previous post). In fact, there is little attempt to hide the commercialisation of psychiatry. Ironically being open about commercial interests does not purify psychiatric science but rather exposes its self-interest (see another previous post). The WPA does need to recognise and correct its own institutional corruption. The corrupting self-interests of psychiatry demand change in psychiatric practice.
Posted by DBDouble at 4:34 pm