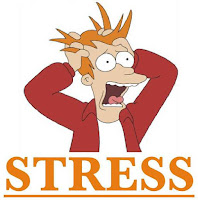 If you've been attracted to this post because of its title, you may well be wondering why I'm stating the obvious (see tweet). Of course depression is related to stress. But a recent meta-analysis of inflammatory markers in depression didn't make this point clear. Instead, it indicated (as I've said in a previous post) that the motivation for studying the role of inflammation in depression is to identify a novel therapeutic target. It concluded that depression is a pro-inflammatory state (without being very precise about what that means).

Actually, the meta-analysis is useful as it provides evidence that the inflammatory marker elevations are not due to an inflamed sub-group as such. Nonetheless, if we ever get as far as anti-inflammatory agents being marketed for depression (see previous post), I suspect this will, at least initially, be focused on those with raised markers or those with physical illness as well as depression (see another previous post).