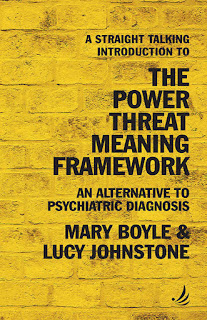 I'm grateful to Lucy Johnstone for this comment on my previous post about 'The overemphasis on psychiatric diagnosis', which I'm posting as a guest blog. Lucy contributed a chapter to my edited book Critical psychiatry: The limits of madness.

I am glad Duncan thinks the Power Threat Meaning Framework, as summarised in the recent ‘A Straight Talking Introduction to ...’ series, offers a valuable way of gathering information about people’s problems, and usefully emphasises the role of adversity in distress. We have significant agreements in our views, and, as we have discovered over the years, some significant disagreements too. Nevertheless, in contrast to many Twitter debaters, we are mature enough to remain civil and respectful in our discussions!

The principal points of disagreement in this case are:

Firstly, Duncan's statement: "PTMF wants to abandon the connection between mental health problems and the sick role, which is why it is so controversial". This doesn’t really capture the PTMF position. For a start, we don’t accept the concept of ‘mental health problems’ as somehow different or separate from emotional distress and suffering. We do, however, acknowledge the obvious fact that such suffering can be sufficiently overwhelming to interfere with one’s life. In such a case, formal exemption from duties by something equivalent to a doctor’s certificate may be needed. However, this doesn’t have to take the form of a psychiatric diagnosis, and in fact the main PTMF document shows that assessments of eligibility and rights do not have to be, and are not always, diagnostically-based (pp. 297-9). It discusses various alternatives, such as expanding the current custom of using a generic, non-medical term like ‘stress’, or more radically, as advocated by some service users: "... a universal rights, asset-based perspective as an alternative to the humiliating requirement to demonstrate enough impairment to access essential financial support" (Beresford et al., 2016).

Secondly, Duncan argues that "getting caught up in the argument about whether mental health problems are illnesses is actually deflecting us from this more important task of a critiquing mental illness as brain disease". But if we substitute the term ‘emotional distress and suffering’ for ‘mental health problems’ in his sentence, then we can see how problematic Duncan's statement is. People can, of course, choose to describe their difficulties in any terms they please, but as professionals we need to acknowledge the giant, unevidenced leap from ‘emotional distress’ to ‘illness’ with all its well-documented consequences – stigma, shame, social exclusion, effects of psychiatric drugs, obscuring of personal meaning, and so on.

I have been noticing various attempts to square this circle – to retain the concept of ‘illness’ and everything that depends on it – by claiming that ‘illness’ is really just a shorthand for the personal experience of suffering and consequent dysfunction. This manoeuvre simply doesn’t work (as explored by James Barnes in this blog post). As I put it in a recent interview, in real life, people who come into contact with mental health services .....

.... are all bombarded with messages about “mental illness” being “as real as a broken arm”, and needing to be managed by drugs “just like diabetes”. Even the dubious compromise that is the “biopsychosocial” model — a way of acknowledging some role for psychosocial factors while at the same time instantly relegating them to “triggers” of a disease process — is not much in evidence on the ground. And furthermore, the biomedical message is reinforced by the fact that these labels are applied by doctors and nurses, working in hospitals and clinics, who use not just the labels themselves but the whole medicalized discourse of symptom, patient, prognosis, treatment, relapse, and so on.

Furthermore, I pointed out that:

I have yet to hear any real life service user say, “Although the doctor told me I have schizophrenia I’m not too worried, because ‘illness’ is really being used as a metaphor for suffering in this case and it doesn’t exclude personal meaning”. I am sure readers are aware that the consequences of being diagnosed — such as being sectioned, forcibly injected, and so on — are not just metaphorical ... Essentially, we need to acknowledge that we are not dealing with patients with illnesses, but people with problems. We cannot make the necessary shift to a more appropriate and humane system unless we are prepared to drop the whole biomedical discourse altogether.

I believe that this radical process of change is already underway, and that what we are witnessing, in increasingly fractious social media exchanges, is the painful process of moving from one paradigm of care to another. In such a situation, the interminable ‘debates’ which so quickly slide into personal attacks can actually be a distraction, which is why I now largely avoid them. We need to focus on developing alternatives. The PTMF is an imperfect, evolving attempt to contribute to this process, and to reach a point where we can acknowledge that human emotional suffering, even in its more devastating forms, is neither disease nor illness. 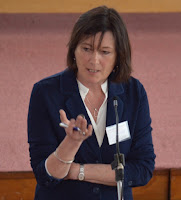 Dr Lucy Johnstone is a clinical psychologist, trainer, speaker and writer, and a long-standing critic of biomedical model psychiatry since her original book Users and Abusers of Psychiatry (first edition 1989). She has worked in adult mental health settings for many years, alternating with academic posts. She is the former Programme Director of the Bristol Clinical Psychology Doctorate, which was based on a critical, politically-aware and service-user informed philosophy, along with an emphasis on personal development. She has written and trained extensively on the subject of psychological formulation as an alternative to psychiatric diagnosis. Lucy is lead author, along with Professor Mary Boyle, of the Power Threat Meaning Framework, published by the British Psychological Society in January 2018. This ambitious document offers a conceptual alternative to the diagnostic model of psychological and emotional distress. Lucy currently works as an independent trainer.
Posted by DBDouble at 9:30 am