Opening up the world of diseases of the nervous system 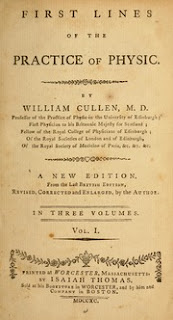 As Foucault (2008) noted in History of Madness, William Cullen (see last post) wrote in The Practice of Physic that:-


I [ie. Cullen] propose to comprehend, under the title of Neuroses, all those preternatural affections of sense or motion which are without pyrexia, as part of the primary diseases; and all those which do not depend on a topical affection of the organs, but upon a more general affection of the nervous system, and of those powers of the system upon which sense and motion more especially depend (Foucault, p.203).

This new world of diseases of the nerves opened up “a whole new pathological space“ (p.203). Medicine was able to move on from ‘metaphysical claptrap’ to integrating the soul and body. “A whole world of symbols and images ... [came] into being, where for the first time doctors enter[ed] into a dialogue with their patients” (p.204).

Constituting medicine on the basis of the doctor-patient relationship led to a reorganisation of psychiatric classification. As Foucault said, quoting Voltaire,


"We call madness that disease of the organs of the brain ... " The problems of madness revolve around the materiality of the soul. (p.208)

The world of the soul opened up an immense reservoir of causes for madness. Foucault quotes from Dufour (1770):-


The obvious causes of melancholy are all those elements that immobilise, wear out or trouble these spirits; great, sudden frights, violent movements of the soul resulting from transports of joy or intense affection, lengthy, deep meditation on a particular object, intense love, lack of sleep, and all excessive exercise of the worried mind, particularly at night; solitude, fear, hysterical affection, anything that impedes growth, healing (p.221)


The reforms of asylums (see previous post) matched the "prevalence and heterogeneity about the genesis of madness" (p. 221). Alongside dementia, mania and melancholia, hysteria and hypochondria were being increasingly associated, and for Robert Whytt, “in the mid-eighteenth century, the assimilation has become complete (p. 277). ... [A]t the close of the eighteenth century, almost without dispute, hypochondria and hysteria are firmly classed as mental illnesses" (p.278). They had been integrated into the domain of diseases of the mind.
Posted by DBDouble at 12:25 pm