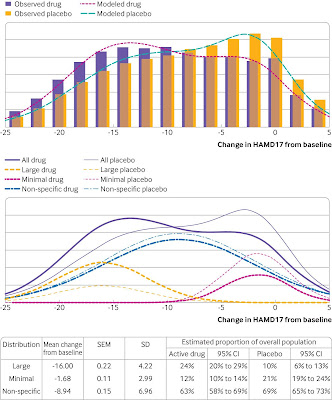 Stone et al (2022) provide data on response distributions of individual participants in antidepressant trials. It confirms previous data that shows a small 1.75 point random effects difference on the Hamilton Rating scale between drug and placebo (see previous post). The best fitting model of response distributions was three normal distributions, with mean improvements from baseline to end of treatment of 16.0, 8.9, and 1.7 points. These distributions were designated Large, Non-specific, and Minimal responses, respectively. Participants who were treated with a drug were more likely to have a Large response (24.5% v 9.6%) and less likely to have a Minimal response (12.2.% v 21.5%).
It’s important to keep in mind that this is only a best fit model and not necessarily think about it too absolutely. Also, this is not new data proving that antidepressants “work”, even if only for those that have a large or minimal response. As is said in the paper, it is still not possible to exclude the possibility that the effects of antidepressants are accounted for by functional unblinding. The placebo amplification hypothesis could still be a valid explanation of the antidepressant data (see eg. previous post). Raters' expectations and patients' suggestibility could entirely explain the small effect size found.

Stone et al suggest if the placebo amplification hypothesis is true that we "might expect shifts in the means of the response distributions for active drug relative to placebo”, which were not found. However, I'm not sure if this is true as I’m unclear if any lack of shift could instead be a result of the model. To my mind, those in the large or minimal groups could actually be the ones that are more likely to unblinded, whereas the nonspecific group essentially remains blinded.
Florian Naudet in a useful Twitter thread emphasises that we need to start from the fact that it has been known for a long time that mean antidepressant effects in clinical trials are small. The limitations, at least, of antidepressants do need to be acknowledged. If the further claim that antidepressants are no better than placebo is true (which I think it may well be), it would have extraordinary implications for clinical practice (see eg. previous post). This is why people find it very difficult to consider that antidepressants may be no better than placebo. People do not want to undermine their faith in antidepressants (see another previous post).
Posted by DBDouble at 2:55 pm